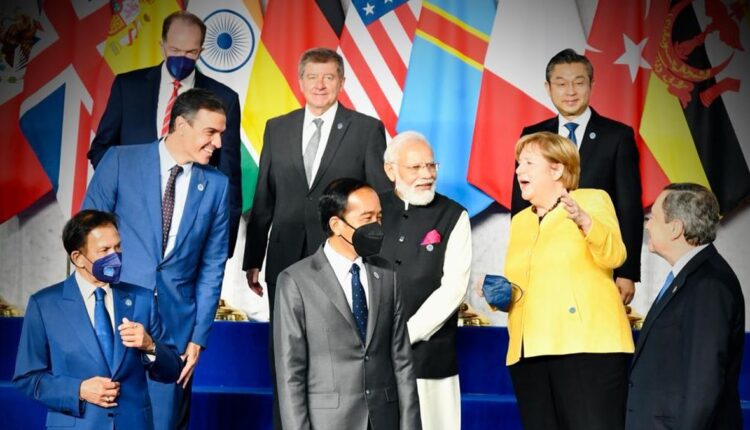 The G20 Summit (Summit) is Indonesia’s momentum to answer the world’s trust. The success of the event is expected to have a positive impact on investor confidence to invest in Indonesia and open up the widest possible employment opportunities for the people.

Indonesia’s future is at stake in the G20. For the first time, Indonesia will lead a global forum consisting of countries that contribute 80% of the world’s gross domestic product (GDP), known as the G20, starting December 1, 2021.

The presidency or chairmanship has been officially handed over by Mario Draghi as Prime Minister of Italy to Indonesian President Joko Widodo at the G20 Summit in Rome on October 31, 2021.

With the acceptance of the G20 Presidency, Indonesia also holds the world’s trust in the success of a number of agendas, especially those related to global recovery through various efforts and concrete solutions. President Jokowi also emphasized that the Indonesian Presidency at the G20 should not be merely ceremonial, but also take concrete actions.

For this reason, Indonesia will continue to encourage countries in the G20 to produce major breakthroughs as well as build collaboration and build strength to ensure that the world community can feel the positive impact of the existing cooperation.

Jokowi had said that this trust was an opportunity for Indonesia to contribute more to the world’s economic recovery. To build healthier, more just and sustainable world governance, based on freedom, lasting peace and social justice.

With the theme “Recover Together, Recover Stronger”, Indonesia emphasizes inclusiveness in the G20 Presidency so that the positive impact is not only felt by member countries, but also developing countries. This intention is reflected in the involvement of the smallest island nation from the Pacific and the Caribbean for the first time in the history of the G20 Presidency, in addition to other developing countries from Africa, ASEAN and Latin America.

On a national scale, the government also wants more people to benefit from the G20 Presidency, especially grassroots groups. To that end, a number of sectors that are inherent and developing in the community have been identified to be brought into the G20 agenda, such as the digital economy, women’s empowerment and MSMEs.

There will be a total of 127 meetings in the series of agendas for the G20 Summit which will not only be centered in Bali, but will also be held in a number of areas so that more people are directly involved.

Based on a study conducted by the Coordinating Ministry for Economic Affairs in collaboration with the University of Indonesia, Indonesia’s Presidency at the G20 will have short-term impacts, such as job creation for 33,000 people in all meeting locations, increasing national GDP by Rp. 7.43 trillion and other economic benefits. 1.5 times compared to the 2018 IMF-World Bank Annual Meeting in Bali.

Meanwhile, for the long and medium term, Indonesia’s strength in the G20 will advance the tourism sector and accelerate the recovery of the national economy. In addition, it will also showcase Indonesia’s developments in infrastructure, connectivity and foreign investment. As well as attracting foreign investment for green economic development and showing Indonesia’s vaccination progress which will certainly boost global confidence in handling the pandemic.

In addition, at the Climate Summit or known as COP26 which was held in Glasgow, Indonesia has committed to achieving carbon neutrality by 2060 or even earlier.

On a different occasion, University of Padjadjaran International Relations Observer (UNPAD) Teuku Rezasyah considered that Indonesia must have good communication both within and outside the country in order to achieve the G20 goals. This means that each ministry/institution as well as the stakeholders involved must synergize and implement bureaucratic transparency.

Of course we hope that the impact of the G20 will not only be felt by the elitists, but also all parties including the MSME entrepreneurs who were previously afflicted by the pandemic. In accordance with the current G20 tagline “Recover Together, Recover Stronger”.