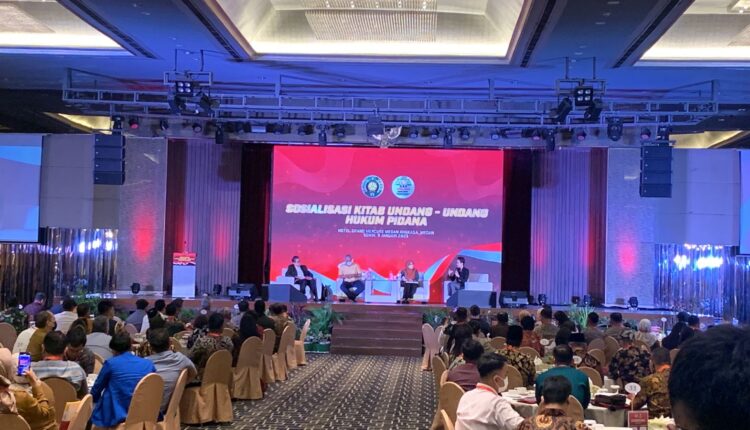 Medan — Academics are of the opinion that the enacted National Criminal Code far more upholds the aspects of justice, diversity in the midst of a heterogeneous Indonesian society which embodies the basic values ​​of Pancasila.

The Indonesian Criminal Law and Criminology Society (Mahupki) held a socialization event for the National Criminal Code (KUHP) in Medan, North Sumatra. The activity was held on Monday (9/1)/

In his remarks, the Chairman of Mahupki North Sumatra, Dr. Rizkan Zulyadi stated that all Indonesian people should be proud of the birth of the National Criminal Code because it contains a balance between obligations and human rights.

Meanwhile, the Dean of the Faculty of Law, University of North Sumatra, Dr. Mahmul Siregar said that for a very long time the people had been waiting for the renewal of the Dutch product Criminal Code with the original legal system made by the nation’s children.

Furthermore, according to him, with the existence of this National Criminal Code, there are many differences in it and far more spurring a spirit of unity and upholding diversity.

“The discourse on the national Criminal Code has existed since 1992, when I was in college. Of course there will be many differences from the previous Criminal Code, but what is certain is that this will underlie the birth of a spirit of unity and more progress while upholding diversity,” he said.

According to Prof. National Criminal Code. Pujiyono has embodied the basic values ​​of the state, Pancasila and has also absorbed broad public participation to ensure legal certainty and reform in Indonesia.

“With these various basic thoughts, ideas were later brought up in the new Criminal Code with the basic values ​​of Pancasila; maintaining a monodualistic balance; historical experience and empirical conditions; as well as the development of science or theory and the dynamics of society. The drafting of the Criminal Code, which can be said to have taken quite a long time, has attempted to absorb all the aspirations of many groups, taking a humanitarian or criminal orientation approach to perpetrators-victims-society, thus opening up a space or something new to ensure legal certainty and legal reform,” he added.

On the same occasion, Prof. Dr. Marcus Priyo Gunarto explained that there was a fundamental reform in the National Criminal Code to replace WvS made in the Netherlands, namely that it did not directly fight the perpetrators of crime, but instead was oriented towards making improvements to the perpetrators.

“But with punishment it is not fighting people who do evil, but fighting their crimes. So the orientation is to improve the perpetrator, change the behavior of this bad person,” he said.

Not only that, but the National Criminal Code also stipulates restrictions on the arbitrariness of the authorities or the community to take justice into their own hands.

“In the context of this protection, the criminal law regulates or limits the arbitrariness of the rulers and members of the vigilante community. One example is regarding cohabitation, there are people who believe cohabitation is prohibited, but there are certain groups of people who still do it. Then there are also other community groups who carry out vigilante raids. When it is determined as a complaint offense, it is limited who has the right to submit a complaint, it becomes a middle way,” added Prof. Marcus.

Thus, previously the criminal law which was only retributive was improved and its paradigm changed in the National Criminal Code to become corrective, restorative and rehabilitative.

“However, there is a change in the criminal paradigm with corrective (error correction), restorative (restore the relationship between the victim and the perpetrator to the affected community, there is also a rehabilitative paradigm,” he explained.

Talking about the Cohabitation Article, Dr. Surastini Fitriasih, who was also a resource person at the socialization, explained that this article also protects women’s matters and is also a middle way for heterogeneity in Indonesian society.

“In the cohabitation article, it is clear that there is protection for the rights of women or children who may be born as a result of the act of cohabitation. This article is the middle ground for debate in a very heterogeneous society. In addition, there are conditions that can be processed if there are complaints, “he explained.

The socialization of the Criminal Code in Medan was attended by hundreds of participants. The event was attended by a number of officials and important figures in North Sumatra.

Academics: The Nation’s New Criminal Code Is In Accordance with Indonesian Nation’s Values

The New Criminal Code Reflects the Noble Values of the Nation