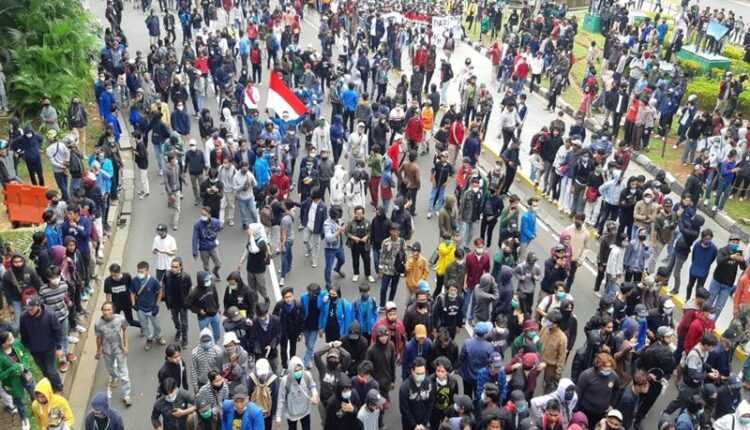 It is feared that the labor demonstrations that have continued since the beginning would form a new corona cluster. When the protesters were arrested by the authorities and subjected to rapid testing, they turned out to be reactive. Even though they are only required to be self-isolated, this situation is confusing because the patient is in contact with many people.

When they were about to hold a demonstration, the workers were reminded to cancel their intention. Not because they are prohibited from protesting against the law, but we are still in a pandemic era. So that activities that gather the masses such as demonstrations are not allowed. This prohibition is solely for health reasons and there should be no new clusters.

However, the workers persisted in protesting and did not comply with health protocols. This is evident from the rapid test that was held during a demonstration in Tangerang Regency. Of the 30 people tested, 13 workers showed positive results for the corona. This is sad because the prediction of the formation of a new corona cluster actually happened.

Hendra Tarmidzi, spokesperson for the Tangerang covid handling task force, stated that they were sportswear workers. Meanwhile, the rapid test was carried out suddenly and was an order from the Kapolresta Tangerang, Kombes Pol Ade Ary Syam Indradi. Tests were conducted to prevent the spread of corona around Tangerang.

Meanwhile in Jakarta there are 12 people whose rapid test results are positive. Sadly, they are not workers but anarcho groups who have joined the demonstration. There were 200 people who committed acts of anarchy and thought the demonstration was a halal mass brawl. After their destructive lust is satisfied, they seem to have karma because they are positive for corona.

The number of demonstrators who tested positive for the corona was very stifling, because they did not want to comply with health protocols. Are there any rules for them to break? Even though the ban on demonstrations is for their own safety. Also his family at home. If you have already been hit by corona, do you still want to blame the government? Don’t play victim.

Moreover, tracking and searching for people who come into contact with corona patients from the labor demo cluster will be very difficult. First, they had contact with hundreds of demonstrators and did not know their identities and addresses. In addition, it could be that traders, parking attendants, and even the bus driver whose brand is traveling are also suspect.

When protesters are self-isolating, then do they do it according to health protocols and completely have no contact with anyone for 14 days? They can promise in front of the doctor, but when they get bored at home they take a walk. Even though it is very dangerous because neighbors, who don’t know anything, can be infected.

Doctor Wiku, spokesperson for the Covid-19 task force team, stated that the demonstrators had the potential to create new clusters. In addition, in 3 days there will be lots of people who have contracted the corona virus. So the task force team’s struggle for 7 months will feel in vain, because the people do not want to have an orderly regulation. Like being hit with indigo, a broken speck of milk is open.

Doctor Wiku continued, if we want the pandemic to end soon, there must be cooperation between the government, medical personnel and the community. If they do not want to orderly and blatantly violate health protocols, the results will be dire.
Because discipline is the key in fighting corona.
The number of demonstrators who got corona was also a headache because they seemed to enter voluntarily into tiger cages. Has been given a warning, even violated. When it hurts, just know the taste. Because when the body starts to become weak, of course it is not strong enough to work and there is no income for 2 weeks. Big loss.

It is hoped that the community can learn a lesson from the demonstrators who contracted the corona. Do not violate health protocols, because if you are positive for Covid-19 it will be difficult on your own. Especially if you don’t have a BPJS, the maintenance costs are exorbitant. The demonstrators’ behavior also made the task force team cry because their struggle to fight corona felt useless.