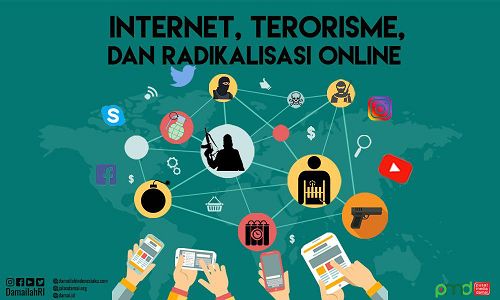 Be Wary of the Spread of Radicalism in Virtual Space

Radicalism can be spread from anywhere, including from something invisible yakn i cyberspace . S sa a new virtual space, the virtual world affects vulnerable users because people do not need to be present in person to understand the radical exposure.

This radical understanding comes with a soft narrative, this ideology is targeting those who have been too disappointed with the government or the democratic system in Indonesia which has long been championed.

The purpose of this radical notion is also clear, namely the emergence of drastic changes to the founding of a new state. To achieve this goal, radicals are not reluctant to use violent means, such as terror of houses of worship or deliberately injuring officials. In short, this radical understanding tolerates all forms of violence to achieve a goal.

If it’s like this, of course it is clear that NKRI must be sterile from radical understanding to its roots.

Especially if this radical understanding continues to move to replace Pancasila with a religion-based ideology. Whereas Pancasila has long been a state ideology that has been able to unite Indonesian people of diverse ethnic, national and religious groups.

If the roots of radicalism are still left, of course the impact will be even more dangerous. Hostility, intolerance to the hatred of fellow humans can arise only because of differences.

If viewed in the context of Indonesianness, the ideology and basis of the Pancasila state would be final based on the agreement of the country’s founders. Where 7 of them are Muslim leaders from mainstream Islamic organizations, including NU and Muhammadiyah.

Of course the basic ideology of this country has become an agreement of many parties, so that no one can damage or replace the state ideology with any ideology, especially with the ideology of the Khilafah which is contrary to the basic values ​​of Pancasila.

Specifically, what characterizes this radical group is formalistic understanding, ritual obedience but lacking in spirit.

They are very obedient to the formal text of the Qur’an and the Hadith. They can barely catch between the lines. They take only what is written.

We are also now aware that the conservative Arabic-style Islamic culture has approached Indonesia massively. Group sympathizers such as Wahhabism are also increasingly wild in campaigning for an unity of theology of monotheism which is considered to be disbelievers.

The Pancasila ideology rejects all notions of radicalism and terrorism. Both ideologies are proven to be dangerous to Indonesia and many other countries. This is because radicalism is an understanding that validates relief and violence.

Even though Indonesia itself is famous as a friendly and smiling nation. If radicalism still arises, of course the friendly image of Indonesia will disappear in the eyes of the world.

Although the government has dissolved radical organizations such as HTI, their ideological residues still exist today. They also infiltrated the demonstrations in volumes.

Worse, radical understanding can also penetrate the state civil apparatus which should be an example for the community of loyalty to Pancasila and the Unitary Republic of Indonesia.

This was evident when the discovery of a policewoman who was exposed to radical understanding and had been absent from his service for several days in order to attend an event on another island.

In essence, humans always crave security, safety and peace. Therefore Islam is revealed as a mercy of all nature. Not as a group that likes to criticize government policies but also invites people to hate fellow human beings, despite having different beliefs.

Specifically, what characterizes this radical group is formalistic understanding, ritual obedience but lacking in spirit.

They are very obedient to the formal text of the Qur’an and the Hadith. They can barely catch between the lines. They take only what is written.

Here they are sometimes they make verses as a fight to hate fellow human beings. Though it is clear that Islam is a religion that loves peace, not hate differences.

We also have to keep in mind that we live in Indonesia, a country of diversity. If we are not tolerant and open-minded, then the roots of radicalism can freely influence our minds.

) * The author is a student of the University of Pakuan Bogor

The Community Must Obey Health Protocols in the New Normal Era