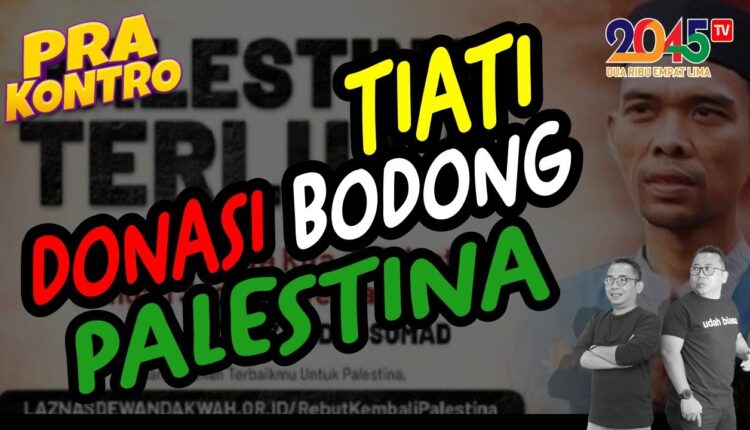 Palestinian suffering greatly felt by mas ya rakat in Indonesia, because the two countries have a fairly close emotional relationship. After Gaza was attacked, many parties appeared asking for financial assistance and they promised to channel it to Palestine. However, we must be vigilant because there are fake donations that are fake and do not reach the Palestinian community .

When Palestinians grieve because Israeli soldiers have shot them, the whole world sympathizes, including the Indonesian people. Finally, when there were several parties who made donation boxes for the Palestinian people, we immediately knocked their hearts out and donated some of our sustenance there. With the hope that the money will help the suffering of the Palestinian people.

However, it turns out that the fact is that there are fake donation organizations. The Palestinian Ambassador to Indonesia, Zuhair Al Shun, revealed that he had never received a penny of aid money for the people in his country, from these institutions. In fact, assistance came from the Indonesian embassy.

This statement is certainly very surprising because people feel cheated by fake donation accounts. Those who are willing to set aside their salary for charity are even lied to, how heartless. Especially if the money collected is not small, it could be over 10 million rupiah. What do you do with the collection of money, you can eat it yourself or you can use it for other things, and you can guess what is wrong.

How can this institution sell stories of the suffering of the Palestinian people for personal gain? Because they always use heartbreaking narratives, coupled with post-attack photos and also Palestinian children who are suffering. But it turns out that all of that is a lie. It is just too much.

This warning about fake donation organizations does not mean that we are prohibited from giving alms, but please be careful before donating money. Make sure the institution is valid and has permission from the Ministry of Social Affairs. If you can, then come directly to his office to determine whether he is genuine and will give money to the Palestinian Embassy, ​​or even just a pretext of fraud.

The reason is that currently many donation agencies advertise on social media such as Instagram and Facebook, and they have accounts and transferable assistance, for reasons of practicality and time saving. However, this online donation has a weakness, which is prone to fraud. Because we don’t know if it’s a genuine or fake institution.

This caution needs to be increased . Reflecting on the previous report, in January 2021, the Financial Transaction Reports and Analysis Center (PPATK) found a large flow of funds from within the country to finance terrorism activities abroad. These donations are often raised through social media by both individuals and organizations

The Palestinian Ambassador to Indonesia, Zuhair Al Shun, explained the correct donation procedure, so that no community would become the next victim. According to him, if we have excess sustenance, it can be collected and given directly to the Palestinian embassy. Then the embassy will distribute to Palestine through official channels.

This method is very effective because the embassy must be trusted and provide assistance as soon as possible, to reduce the suffering of the people there. Because from the embassy, ​​the distribution account is also official and must be accepted by parties in Palestine who are entrusted with giving to its citizens.

Helping other people, for example the Palestinian people is very good, due to the fact that they really need help to survive in the midst of a heated situation. However, when donating, it must go through official channels, namely via the Palestinian Embassy office. Because if it goes through another, it could be a fake donation.

OPM Terrorists Get Weaker and Divorce

KKB in Papua injures civilians, must be eradicated