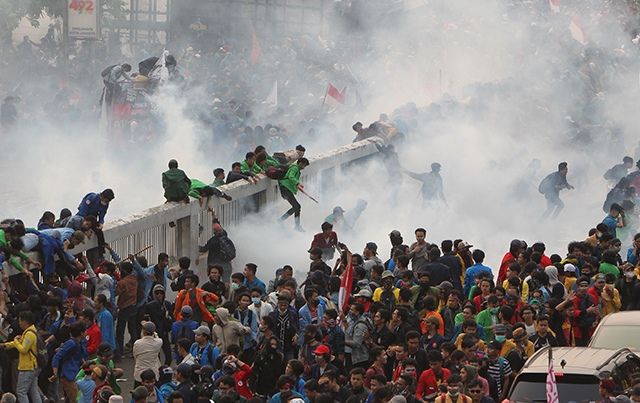 Beware of Intruders in the Midst of Labor Day

Anarko is a group of young people who often act anarchy. They want to enter the demo arena because they are paid by bad guys. Anarko is willing to burn tires or damage public facilities, because they are rude and like to riot.
The public was wary of Anarko’s arrival during the labor demonstration. Don’t get caught in a traffic jam because of a labor demonstration and Anarko destroys his car or motorbike. I’m afraid that there will also be injuries caused by stone throwing from Anarko. When the 14th of May later the public is asked to avoid the area around the DPR RI building and Istora Senayan which became the demonstration site.
Anarko must be wary of because their actions are often too late. Not only did they start a stone war against the security forces, they were desperate to commit theft, taking advantage of the precarious situation. They are a group that has the heart to hurt people by looking for opportunities in adversity.
Apart from Anarko, the one to watch out for during the demonstration is the provocateur. They deliberately infiltrated and instigated the demonstrators to act violently. The demonstration which was originally just to convey aspirations turned into a war scene, because the workers were provoked to attack the apparatus and act violently.

Provocateurs must be watched out for because they don’t want the embarrassing incident at the demonstration a few months ago to repeat itself, when Ade Armando was beaten by the masses to a pulp. After becoming a victim of a mob rampage, Ade Armando was treated at the hospital due to serious illness.
Do not let the next victim who likes to take the law into his own hands. Even though he is not an authority, he feels he has power and attacks and tortures others. Indonesia is a state of law and lest there be any person who deliberately infiltrates and provokes many people to act in anarchy and take vigilante action.
The presence of Anarko and the intruders were paid for by an unknown party. Investigations continue to be carried out to find out who has the heart to send intruders and take advantage of the emotions of the workers who are demonstrating. The intruders were also heavily criticized for wanting to demonstrate when the pay was small, not commensurate with the risks.

The implementation of the labor demonstration on May 14, 2022, is vulnerable to being infiltrated by provocateurs who can trigger public anarchy. Therefore, the labor element is asked to be wise by celebrating Mayday in a simple way or even canceling the grand demonstration.

Synergize in Watching the Increase in Covid-19 Cases Post Eid