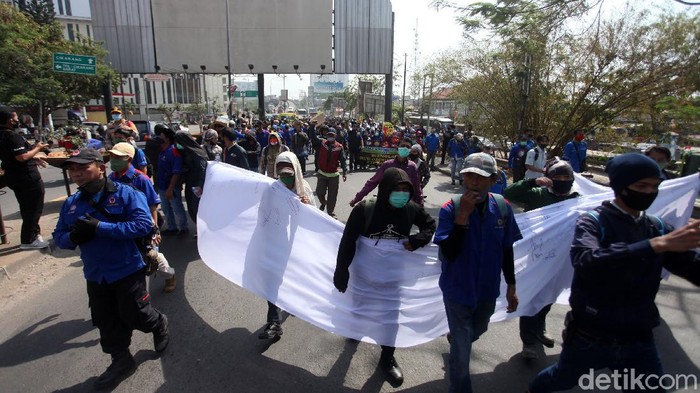 KAMI incessantly create horrendous controversies. After making a declaration and demanding the screening of the G30S PKI film, now they support the workers’ action to strike and demonstrate against the omnibus law. Many people sneer because WE are only capable of securing fame and quality.

The workers’ action to strike en masse and followed by a demonstration against the omnibus law, will be held from 6 to 8 October 2020. What makes this demonstration will be dissolved is because it was carried out during the pandemic. Moreover, it is feared that provocateurs and other parties who are sneaky and take advantage of the heat of the situation are afraid.

This is evidenced by the KAMI statement which contains support for the workers. They even mobilized sympathizers in various regions to support the strike, because it was a struggle to demand rights. WE also think that if the omnibus law of the Job Creation Bill is formalized, there will be chaos in Indonesia.

This KAMI statement makes people ignore them even more. Because instead of making your own achievements, you ride on other people’s actions. While the topic of the mass strike due to workers’ opposition to the omnibus law was viral. Why do social climbing and take advantage of other people, if you want to seek community sympathy?

Author and social activist Denny Siregar stated that KAMI are clearly behind the workers’ actions. He also asked the community, which side would they side? In that sense, people are told to choose between pro US and pro government. Of course the people will continue to support the government and reject US who can only talk without achievements.

KAMI also blame the omnibus law which they think is not pro-people. In fact, the omnibus law wants to save workers from remuneration that does not comply with UMP standards. They are also given a limit to work, a maximum of 40 hours a week, so they don’t get too tired.

If KAMI can only provoke and ride on the workers’ action, it is feared that this mass strike will be more chaotic and there should be no catastrophe afterward. When they demonstrate, we don’t know which are purely workers, KAMI sympathizers, or provocateurs. All are parroting to defend the workers even though the only ones right are defending their own interests.

KAMI statement about siding with workers also made the atmosphere even hotter ahead of the ratification of the Omnibus Law on the Job Creation Bill. Don’t let a massive demonstration lead to acts of anarchy, because of KAMI provocation. Peaceful actions that can lead to disaster can occur, because they exert influence so that workers hate the government.

KAMI promise to save Indonesia has clearly failed if they ride on the workers’ action. How can this country survive if they can only provoke the people? Labor and the government were pitted. Workers and apparatus at stake. Losing becomes charcoal, winning becomes ashes. All that was left was a thousand regrets burning with emotion.

Even though during the Covid-19 pandemic, we should have cooled the atmosphere that previously heated up. Many people are more sensitive because of the unstable economic situation. However, KAMI actually influence workers to continue demanding that their salaries be increased again, even though the minimum wages of UMK are actually quite large.

Are we still defending KAMI who can only be provocateurs? Think carefully. if they want to save Indonesia, they should be able to create new jobs for the workers, so that the demonstration is canceled. But are they willing to spend themselves to sacrifice and save Indonesia? Not necessarily.

If KAMI want to ride on the workers’ actions, then it is clear what their original character is. Want to go viral without achievements but to get other people’s news fame. Beware of any incitement by provocateurs during the mass strike and labor demonstrations from 6 to 8 September.

The Government Seeks to Provide Covid-19 Vaccine on Time