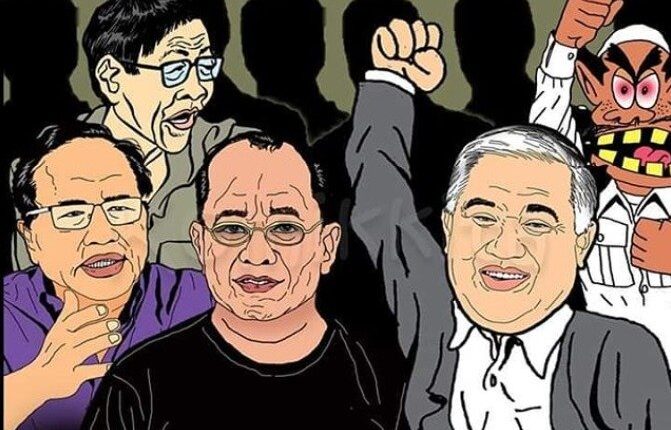 The KAMIDeclaration on August 18 caught public attention, because many of its members were popular, such as Din Syamsudin and Rocky Gerung. It’s just that at the event they attacked the government with 8 demands which unfortunately did not make sense because they were in accordance with the facts. However, it is quite disturbing for the government in regulating people’s lives.

The action of Din Syamsudin and friends in the declaration of the Coalition for Action to Save Indonesia, turned out to only show reading of edicts and demands to the government. They consider the government under the coordination of President Jokowi to lead Indonesia to the hole of destruction. The MPR was also not very functional due to the lack of quota for the opposition parties.

Giving input for a more advanced Indonesia is fine, but don’t give damaging criticism. Political observer Hars Wicaksana stated that in a democratic country it is permissible to criticize government regulations, but the effort must be developed and provide solutions. The problem is, KAMI demands and criticisms do not provide any solutions.

KAMI edict and demands are even considered ridiculous because they seem to show the badness of the government, but unfortunately it doesn’t match the reality. If they want to save Indonesia, why sue the government? Their announcements and demands can actually make the government’s image worse in the eyes of the public.

We will see from the second point of KAMI demands. They want the government to seriously tackle covid-19. If ordinary people trust US, they feel the government is not serious in dealing with a pandemic. Even though the government has tried to prevent the corona disease from spreading and eliminating the cost of the treatment via BPJS.

Ordinary people lose faith in the government and do not want to comply with regulations such as paying fines when they forget not to wear a mask. KAMI demands can lead to incitement to the public to disobey the government and this is dangerous because it can complicate the task of the Covid-19 task force team. WE did not think long about the effect of these demands.

At the third point of KAMI direction, they force the government to take responsibility for tackling the economic recession. In fact, in fact, Indonesia is not in a recessionary status, because economic growth is above 5% even during the pandemic. If KAMI broadcast a recession hoax, it will have long consequences for people’s behavior which can make it difficult for the government.

The public believed KAMI words because they were considered senior figures, then panicked because they thought a recession had occurred. They withdraw cash from the bank and compete to buy gold. When the money in the Bank runs out, it can result in a Bank Run and its liquidity going down, as a result it is threatened with bankruptcy. If gold bullion is scarce, the price will increase.

This is the worst situation imaginable when everyone believes in KAMI demands. The government can be confused because there is panic in the community and there should be no economic crisis volume 2. Therefore, all of our members are expected to keep their talk and do not convey arbitrary demands, without checking the reality. If not, it will hurt the government.

There should be no more news about KAMI demands because it can brainwash the people and make them hate the government. In communication theory it is said that if bad news is broadcast continuously, it will be seen as fact. KAMI demands can be dangerous because they are considered facts and make it difficult for the government to carry out their duties.

If KAMI can only discredit the government, things will get even more chaotic because the people don’t want to obey the president. So how can this country progress when the situation is like this? If KAMI want to save Indonesia, don’t even become provocateurs, but take social action that touches the little people. Don’t just talk.

KAMI figures are including seniors. They should be ashamed of their age, but act like children who seek public attention. They also have to watch what they say and don’t just sue the government. People can be provoked and make it difficult for the government to govern the country.

The Khilafah Is Not Suitable For Indonesia