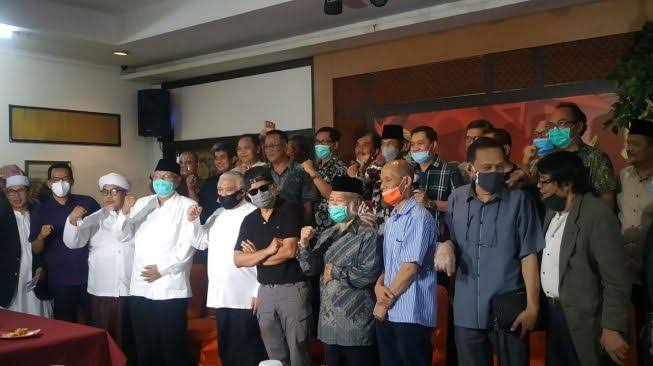 Beware of KAMI Provocation during the Covid-19 Pandemic

KAMI are the bywords of the public for making a massive declaration. They claim that the 200 members who were present at the time, united to improve the country. However, it is feared that the event will provoke people to disobey health protocols, because they ignore the rules of maintaining distance.

The Coalition for Action to Save Indonesia (KAMI) will hold an official declaration, 18 August 2020 at 10 am. The choice of this date is because it commemorates the birthday of Pancasila. The event which was held at the Proclamation Monument was attended by US leaders, Din Syamsuddin, Refly Harun, and other members consisting of retired officers, former officials, and children of former officials.

In this official declaration they issued an edict containing disappointment with the current government. KAMI are united because they want to save Indonesia which they consider a shipwreck. As well as issuing 8 demands to the government. In fact, their behavior cancels sympathy, even the event almost failed because the permit was almost late.

The public considers that the KAMI declaration is actually a blunder because it does not comply with health protocols and is considered to lack respect during the pandemic. Some of these figures are indeed wearing masks but do not comply with the rules of physical distancing. The declaration was also attended by hundreds of people. So it is feared that it will even create a new corona cluster.

Whereas as community leaders, KAMI members should set a good example. For example, obediently wearing a mask even though you have used a face shield. Some members take off their masks and this is dangerous, because the covid-19 virus can spread via air. Moreover, there the conditions are crowded and the air is stuffy, the potential for spreading is even higher.

It is feared that figures who are members of the KAMI will provoke the community and even make it difficult for the government to work in dealing with the Covid-19 pandemic. People who watch the declaration’s live broadcast will feel lazy to wear masks and keep their distance, because they are imitating KAMI members who are not disciplined in obeying health protocols.

Besides that, our leaders always criticize the government. People who initially took a neutral stance were even influenced and also resented government programs. For example, they are lazy to go to the hospital because all patients are required to do a rapid test. Why do they think there is a point in obeying the rules if the government acts like that?

This could make it difficult for the government because people without symptoms suddenly died and were not known to have contracted the corona. This case can be dangerous because family and people who come into contact with it could potentially be infected. It will also complicate the tracing process because the family does not know that the deceased died because of the covid-19 virus.

KAMI leaders who feel disappointed with government policies can also provoke people to criticize the president and his actions. The community became apathetic and considered the program to overcome corona was just a trick. This could increase the number of Covid-19 patients because there were many violations of health protocols by the public.

The public can also take criticism against the government and president, because they are imitating the actions of KAMI members. Even though this could be subject to articles of the ITE Law. Supposedly, as experienced former officials, they could act wisely and set a good example for ordinary people.

KAMI leaders should have acted wisely and criticized politely. They can also make secure declarations. For example doing it online via the Zoom application. If they hold an event and are attended by many people (plus journalists who cover it), then they are breaking protocol and disrespecting the Covid-19 pandemic.

Our declaration is dangerous because it can create a new corona cluster. And provoke the public to join in blaspheming the government. They also violated health protocols and were lazy to comply with government regulations, because they were incited by KAMI.