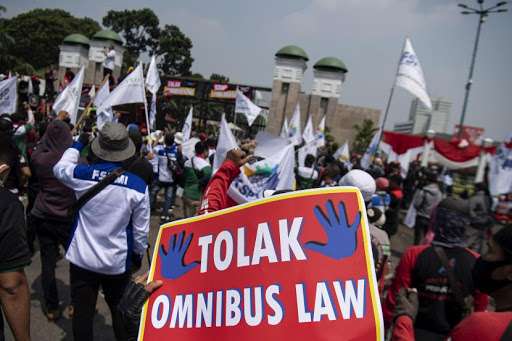 The demonstration of the workers to protest the omnibus law is used by KAMI as a means of good practice. They supported this action, but only as a mask to win sympathy from the workers. In fact, KAMI only prioritize our own interests without caring about the fate of the workers.

Gatot Nurmantyo as the KAMI presidum stated that he and his organization were ready to support workers’ actions in mass strikes and demonstrations against the omnibus law. Even this retired officer has followed suit in evaluating the omnibus law as bad, which he thinks is less profitable. Gatot wants to image himself as a figure who supports the little people.

Even though we are actually vigilant with KAMI maneuvers on this one. While there is an action against the government, this organization follows along and seems to defend the workers. Even though the support given is fake and it is unclear how it will take shape. Do they really want to take to the streets in heat protesting?

Moreover, KAMI consist of people who are elderly (read: over 40 years) so that their endurance is doubtful. It seemed very unlikely that they would join the demonstration. So what support can be given to workers? Just motivational words? So absurd and not filling.

In fact, this support actually complained between the government and the people. KAMI feel happy because finally there is another demo so that it can be used to ride in fame. With a statement of support, it is as if they are pro-workers. Even though it was only a good quality, because the topic of labor demonstrations was busy and they wanted to be covered.

The people must be vigilant and research KAMI very cunning intrigue. We must be politically literate and not be swayed by their whispers. Workers are prohibited from demonstrating not because the President is a tyrant. However, currently it is still a covid-19 pandemic, so mass gathering activities are strictly prohibited. The reason is health, not politics.

Workers demonstrated because they opposed the omnibus law. Even though there are no articles that harm them. In fact, workers are protected with a minimum salary of UMP and if they work for more than 1 year, the salary is above the standard. Workers are also limited in their working hours. However, KAMI joined in instigating that the omnibus law was very detrimental. This is just an accusation without any basis in fact.

The Minister of Manpower Ida Fauziyah stated that not all workers wanted to participate in the demonstration. Some of them are pro to the virtue of government. In that sense, they are the easy targets of KAMI provocation to be invited to demonstrate against the government. The workers who demonstrated and KAMI enjoyed the results. Do you want to be like that?

Moreover, from the start the KAMI mode of power has been read and they don’t want to wait until the 2024 presidential election. Moreover, the organizational structure is very similar to a country. There are presidium, upper house and executive. KAMI have prepared various modes so that they can change the president at will.

Maybe KAMI thought this demonstration would be held on a large scale, like during the demonstration against the regime in 1998. So that it could be used to provoke the masses. The goal is of course to overthrow power and shape people’s power. So they are busy instigating it here and there, and think that the prohibition of the demonstration is not in accordance with human rights.

Beware of scenarios designed by KAMI. The demonstration could have been peaceful, but in the midst of the oration there was a provocateur who was their messenger. Then the masses stepped in and carried out acts of anarchy. Also against the apparatus on guard. Even though the apparatus was deployed because it prevented physical distancing violations.

Do not want to be influenced by KAMI incitement to protest against the omnibus law. First, their support is fake because they just want a good job. Second, KAMI want to fish in the cloudy water and take advantage of the hot situation during the demo. So that the people and workers are provoked to hate the government.

People Remain Enthusiastic to Use Masks