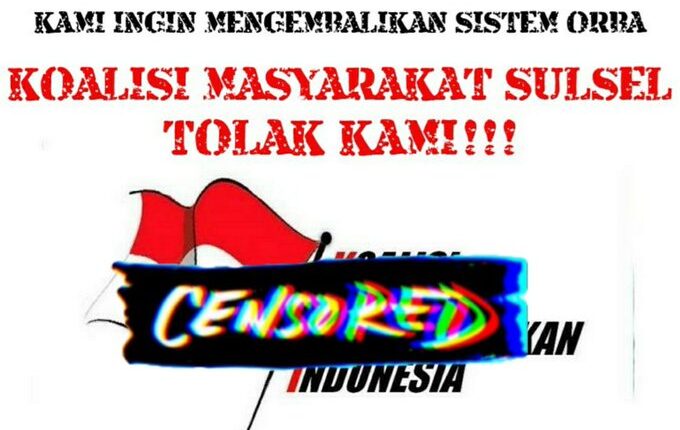 The Omnibus law is a new model law in Indonesia and the Coalition for Action to Save Indonesia (KAMI) firmly rejects it. Even though they may not have read it because it consists of 900 sheets. However, they were even consumed by hoaxes and invited the whole community to reject it.

The covid-19 pandemic in Indonesia has not ended and the government is using new strategies to deal with it. In addition to requiring health protocols, there is also a new law called the omnibus law, which is expected to overcome the effects of a pandemic. Especially in the economic sector, so that we don’t fall into a recession. Because this law can accelerate investment in Indonesia.

But unfortunately there are many hoaxes about this law. Even though there are more people who believe that the omnibus law is beneficial, there are some who are consumed by fake news. Including OUR members. Through their official statement, KAMI support the workers’ demonstration against the omnibus law, because they think it will harm the state.

KAMI also stated that the contents of the omnibus law were not suitable because they prioritized foreigners. There is also no certainty in the provision of salaries, leave rights, and other employee rights. Even though President Jokowi has made a speech and stated that the hoax in the omnibus law is not true. Because the payroll is still fair, there is time off, and foreign investment is needed for the progress of the country.

This is where the community is split 2. Some who reject the omnibus law feel happy because there is KAMI support who are considered community leaders. Even though they are only former officials. However, there are those who continue to support the omnibus law, especially the labor and investment cluster, because there will be new hope for the Indonesian economy.

This is where KAMI spread our influence and persuade pro parties to the omnibus law. They are provoked that the government prioritizes foreign workers over local. There is also an illustration that foreign investment is always detrimental to Indonesia, because land is annexed arbitrarily. Omnbus law is also accused of destroying the state order.

If society thinks logically, it will not be affected by KAMI provocation. First, foreign workers are allowed to enter Indonesia, but only those who have special skills. The process is also not arbitrary. Workers don’t need to be afraid of being evicted. Moreover, so far, foreign workers have entered because Indonesian citizens do not want to work in places that they think are remote.

Foreign investment is not always bad either. Because investors not only pour money, but also must transfer knowledge. Local entrepreneurs will mean smart and have a global perspective. In fact, in the digital era, many unicorn companies have collaborated with foreign investors to grow their businesses.

This is where we see KAMI members who always see the negative rather than the positive side of a law. If they have a goal of becoming a presidential candidate, do people want to have a leader like that? Of course the answer is no.

They are also proven to lack insight and not update because foreign investment is always seen as bad, even though it has been several years since start-up companies have always worked with investors. Do people still want to support US who are not contemporary?

People do not want to be provoked by the chatter of KAMI members because they are only consumed by the omnibus law hoax circulating on the internet. After all, a wise president might not want to overthrow his people. The omnibus law law has emphasized that its interests are not only for entrepreneurs, but also for employees and all Indonesian people.

Don’t listen to KAMI scolding because they always oppose government regulations. The Omnibus law is designed to increase investment and improve economic conditions in Indonesia. Not to “sell” this nation to foreigners. Beware of KAMI provocation which always slander the government.