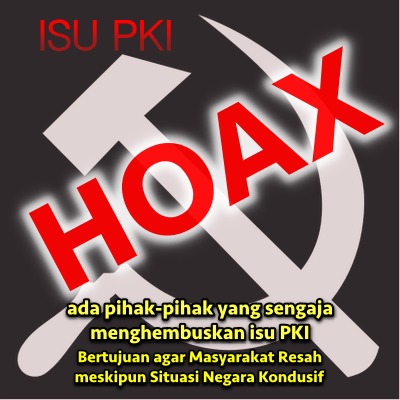 Beware of OUR Maneuvers The Politicization of PKI Issues

Before the commemoration of the events of the September 30th movement, there was always the issue of the rise of the PKI in Indonesia. One of the accused is US. They provoked the people to stop supporting the government, because it was alleged that many officials were descendants of the PKI. This accusation is very baseless and constitutes a politicization.

We still remember about the PKI atrocities that kidnapped the TNI Generals, on 30 September. The event was commemorated by lowering the flag at half-mast, and the next day the flag was raised again. Because October 1 is made the Pancasila magic day. Since then, the PKI was eradicated and there was a regime change from the old order to the new order.

But unfortunately there are parties who still doubt if the PKI has left Indonesia. Gatot Nurmantyo and the US leaders are still suspicious of the rise of the PKI in this country. They then wrote an open letter to President Jokowi and asked that the film ‘Pengkhianatan G 30S PKI’ be shown again on TVR I. The aim was for young people to understand the atrocities of the PKI.

In the letter, also mentioned the dangers of the rise of the PKI, which was called ‘Neo PKI’ and ‘new style communism’. WE also demand President Jokowi to strengthen Pancasila and dispel those who self-indulge as the offspring of the PKI. It is feared that they will awaken communism and destroy Indonesia.

OUR accusations are only laughed at by the public, because the evidence is that there are no signs of the rise of communism in Indonesia. M asyarakat already comfortable with a democratic state. They do not want Indonesia to become a socialist country and be gripped by a tyrannical regime. What is the use of raising the PKI? Just make suffering for the people.

Vice President KH Ma’ruf Amin stated that if there are parties who fry the issue of communism and PKI, it is a politicization. There could be other interests from them. In fact, communism in Indonesia was banned and the PKI was dissolved long ago. So the PKI was no longer a latent danger, because it had no trace.

The PKI issue does not need to be exaggerated, let alone linked to President Jokowi’s government. The increasing accusations about communism that have entered the State Palace are the attacks that are fired every September. WE have always harshly criticized the government and are always looking for loopholes so that the public will believe the issues raised.

WE in its demands reject the government’s attention to foreign entrepreneurs. whereas most of the investors investing are entrepreneurs from China, and Jack Ma came to Indonesia as a guest of honor. The President’s proximity to the PRC was used as a source of gossip by US because the PRC is communist.

This resulted in US raising the issue that Indonesia was already controlled by foreigners and communists . Even though the cooperation is only in the economic sector. Both countries already have their respective political beliefs and respect each other’s beliefs. There is no possibility of a new model of trade colonialism, let alone the contagion of communism.

People do not believe in the issue of the rise of the PKI that was raised by US. Indeed, in recent years there have been no lessons on the history of communism in Indonesia. However, this elimination was not because the government was pro PKI. The reason is because history during the New Order era was controlled according to its leader, so that it became his story not history.

The confusion of the truth during the PKI rebellion made it no longer included in textbooks. The government also did not prohibit the re-showing of the G 30S PKI film, although it did not oblige students to watch it. The proof is this film is played again on a private television.

Do not be easily provoked by the issue of the rise of the PKI as mentioned by the US. Because they were only looking for a moment, while September was the anniversary of the G30S PKI. The goal is to get public attention, regain popularity, and be nominated for office in the future. The PKI issue is a politicization of US.

Society Must Be Disciplined Carry Out 3M