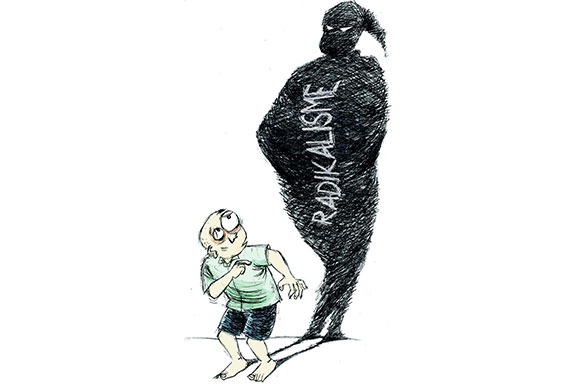 Radical understanding really must be wary of, this understanding does not only target educated or young people in lectures, but also has the potential to target children. In 2018, Indonesia was shocked by the involvement of children in suicide bombings in three churches in Surabaya.

The involvement of children in these acts of terrorism has worried many parties. What a child who can be likened to like white paper, is forced to follow in the footsteps of his parents to spread terror in a house of worship.

Therefore, parents are also required to be vigilant and examine in detail before deciding to entrust their children to take pre-school or elementary education.

We, too, can easily recognize the characteristics of schools that have been exposed to radicalism, one of which is that a flag ceremony is never held even if only once a year. The students were also never invited to sing Indonesia Raya songs and other national songs .

The entry of radicalism among students is influenced by, among others, teachers or instructors who are affiliated or sympathetic to organizations that wish to replace Pancasila with transnational ideology. Later this will lead children to support the understanding of the Khilafah.

Children have become objects that are very easily exposed to radical understanding, because children are very easy to absorb doctrine. In addition, children tend to be more loyal than adults so it is easy to become radical.

In addition to teacher influences, radicalism targeting children also occurs due to the swift flow of information circulating on social media and the internet. Especially at this time many people are looking for religious knowledge through the device. As a result, many have gone astray because they did not know the origins, propositions and sources of the information.

Many factors make children vulnerable to radicalism. But the main factor is family and educational institutions. This is evidence that many children are exposed to radicalism through online and institutions such as suicide bombings in Surabaya and Sibolga, as well as children found in ISIS propaganda videos spread on social media such as Youtube.

It is undeniable that Social Media has become one of the most extraordinary tools for spreading radicalism. Children when getting radical information will usually feel curious and rarely feel afraid. This curiosity is used by radical groups to lead them to access information that has been designed through social media.

Therefore there is no reason for parents to be enthusiastic about social activities that are popular with children. Although not as sophisticated as children in operating the device, parents must remain involved in controlling children to remain in positive internet access.

To find out the characteristics of children exposed to radicalism is certainly not easy. But usually, with their appearance can more easily detect it. Usually their clothes show affiliation to certain religious groups.

Do not let children who are still innocent, become the main object in the spread of radicalism. So that child protection should be on the agenda and priority of national development, so ideally children are protected from exposure to radical ideas.

But the bombing incident involving children has added to the shared homework (PR) list that must be prioritized by the government to be followed up.

In addition, families, especially parents are also not b indifferent to the activities of children such as when reciting or studying. That is, parents must always check and balance with the lessons learned by their children.

The reason is that radicalism can be infiltrated through songs, stories, learning questions and other learning media . The content usually leads to intolerance and hate speech.

One way to prevent or fortify children from radicalism is to stimulate the love of the country from an early age. One of them is through simulation- stimulation such as songs that contain elements of nationalism.

In addition, the patriotic stories of the fighters also need to be told back to the children. The stories of heroism seizing independence involving various ethnic groups and religions should be worth telling so that children understand that Indonesia is a Diverse Nation.

The principle of radicalism begins with intolerance, so efforts to foster tolerance must be fostered both in the family and school environment .