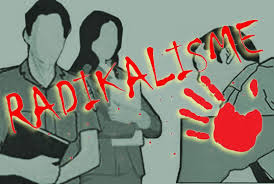 Beware of Radicalism among Civil Servants

Civil servants are vulnerable to poisoning by the teachings of radicals. This is very dangerous because they should be employees of the state, they must also be loyal to the country and should not think like separatists. To prevent the actions of civil servants who turned out to be radicals, there is now a complaint portal to report them.

Minister of Religion Fachrul Razi stated that civil servants must be free from radicalism. According to him, civil servants exposed to radicalism could threaten the basic values ​​of the Republic of Indonesia. He even questioned, why would a civil servant be paid if he eventually became a traitor to the nation. He said this when he was met at a public campus in Malang.

The statement of the Minister of Religion is very fitting with the current situation, when there are intruders from radicals who succeeded in becoming civil servants. It could be that they were civil servants long before the anti-radicalism rules were formalized, so they passed the CPNS exam. Yet we know that radicals hate the sovereignty of the Indonesian state, so they are dangerous.

One civil servant suspected of being a member or sympathizer of radicals is a civil servant who wears a corpri uniform whose length is up to the knee. So that it looks like a robe of men, while the pants are clad. He clearly violated the rules of civil servant uniforms because what was allowed was a uniform shirt along the hip korri.

It takes a strict sweeping to find out whether there are civil servants who are in fact radicals or not. Because it also takes evidence and witnesses that are sure that he was exposed to radicalism. It may be that he has written on social media about expressions of hatred towards the government and invites followers to establish a caliphate state and abolish Pancasila.

To overcome radicalism among civil servants, there is now a portal to complain if there are suspicious persons. So a civil servant can click on the site to report, that there are civil servants who apparently do not have a sense of nationalism, like to vilify the government, reviewing SARA issues on social media, anti-Pancasila and anti-NKRI, or others.

If there is a civil servant who turns out to be a member of the radicals, then he can be subject to sanctions ranging from mild to severe. When only at the stage of sympathy, then he only got a reprimand from the boss. When the civil servant is proven to be a member of the radicals and is proven guilty even though he has been reprimanded, he could be threatened with criminal law and must be jailed for at least 2 years.

Even when the civil servant is proven to be a radical radical and always hates the president and his government, he can be severely punished in the form of dismissal. Because he prefers to be loyal to the radicals of the government. A civil servant will find it difficult to advance his career and fail to become an echelon official, because he is proven to be a member of the radicals.

Punishment is given to give a deterrent effect to the civil servants concerned, so as not to repeat their actions. Because as a state employee, he must be loyal to the country. Don’t be a traitor and be persuaded by the seduction of radicals, who used to give promises to go to heaven together. Though they more often commit acts of violence and bombings than doing good deeds.

Therefore, if you are a civil servant, you should never be invited to become a member of the radicals. Although persuaded by the lure of going abroad for free, being a cadre of radicalism is tantamount to separatists. Beware because they are very good at seducing potential victims.

Radicalism that exists among civil servants is very disturbing, because civil servants who are members of radicals can easily take advantage of the state’s positions and facilities. The goal is to find new cadres. A civil servant who is proven to be a member of a radical group can also be severely punished, even fired.

)* The writer is a citizen, living in Semarang

Adaptation of New Habits to Restore the Tourism Sector