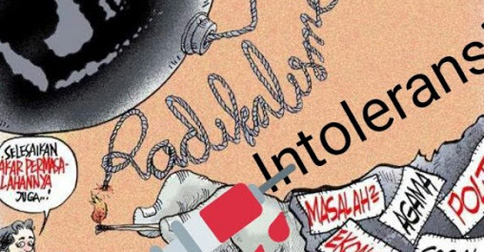 Beware of Radicalism in the Educational Environment

Radicalism is a dangerous notion because it invites followers to be unfaithful to the state. Their ideals in forming a caliphate state created ambitions to recruit new cadres and spread their teachings. Including to school institutions. We must be vigilant so that children are not educated by radical teachers.

Schools are educational institutions that are supposed to transfer knowledge to their students. In addition, in school, children are also taught to live in discipline and respect for teachers. Unfortunately the understanding of radicalism began to enter the educational environment. There are schools that have been founded by radicals or teachers, including their sympathizers.

Radicalism in this school is certainly dangerous because students are taught to be intolerant people and assume the group is always right. In fact they are invited to jihad because the teacher tells about the injustice committed by the government. The students felt called to his soul and then dared to be a bomb bride, so that he died in vain.

Irfan Amalee, director of Peace Generation said that radicalism was indoctrinated in various ways. Radicals are intentionally holding doctrine with various efforts to create new cadres, including school students. In educational institutions established by radicals, they are taught about how to reach heaven through violence.

In addition, the teacher also taught that in its history, the ulama participated in the struggle for independence. But when Indonesia gained independence, they were disappointed because the state had the principle of Pancasila, not the Caliphate. The teacher also gave information about the advantages of the caliphate state and cursed the current regime which they said was unfair.

This condition is certainly worrying because young students are instead directed to jihad and to hate the government. Though they should learn about mathematics, science, and other knowledge. But instead it was taught about hatred and intolerance, as well as anti-foreigners who were considered as invaders.

As parents, we must be vigilant and careful in choosing schools, especially those based on religion. For example madrasa or pesantren. Look first at the history of the educational institution and examine who its founder is, who is the principal? Did they teach about nationalism or were they actually sympathizers of the radicals?

Do not let the wrong choice because later children can grow into people who lose their sense of nationalism. They also changed and wanted to go to war in conflict-prone areas, like Syria. Also more obey the teacher’s words than parents.

Why up to like that? Because they have been indoctrinated into becoming radicals. For them, going to war is jihad, and the teachings of the school are too deep-rooted. Before it’s too late, we must be vigilant and careful in choosing educational institutions for children.

If the child has already entered an educational institution owned by radicals and you only find out a few months later, immediately move to another school. Of course it will cost more later, but that’s better. Rather than later they are already indoctrinated and even brave against their parents.

At home, teach them again to raise the sense of nationalism. For example, by setting up the national anthem and inviting to watch films about Indonesian history. Over time the doctrines of radical educational institutions will erode and he is aware that Indonesia consists of many tribes and religions, and he must not justify his own group.

Radicalism in educational institutions makes us very sad because it can damage the future of children. Instead of wanting to look for college scholarships, they instead aspired to depart for jihad and no longer obeyed their parents. Beware because the guise of radicals is increasing and they are also making schools to spread their teachings.

)* The author is a citizen, living in Bogor