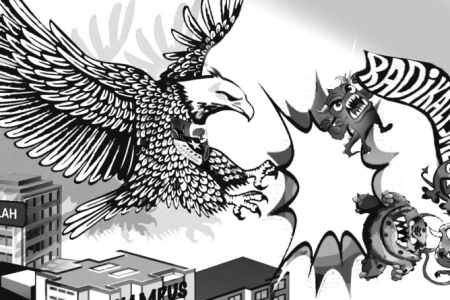 Beware of the Spread of Radicalism in the State of Pancasila

The spread of radical understanding has become one of the important issues that should be watched out for in Indonesia. Radicals believe that Pancasila is a tag and there is no state system that is better than the Khilafah. This understanding is spread massively and quietly through various studies both offline and online.

It means that it is very clear that Pancasila is a national ideology that is final and cannot be contested. Moreover, Pancasila has been agreed by the founders of this nation who come from various tribes, nationalities and religions.

The spread of radical understanding is also targeting educational institutions, there are several indicators that show that a school is against anti-Pancasila, such as not carrying out a flag ceremony, never singing the Indonesia Raya song, not putting up photos of the president, vice president, picture or plaque of the eagle and the most severe absence of the Indonesian flag.

At present, when school activities are still carried out at home, the spread of radical ideas continues to wriggle on social media. Even the actions of radical groups who attacked the security forces were also apparent.

Meanwhile the Ministry of Communication and Information has recorded as many as 1500 sites and social media accounts that indicated uploading radicalism and terrorism content during 2019.

Radical groups take the internet and social media seriously because they reach a wide range of citizens. Of the hundreds of thousands or millions who watched or read the information uploaded, a certain percentage was indoctrinated. From there, just build, build networks and care for them to strengthen the position and one day be used for the interests of the group.

The internet can already be felt with the many ease and acceleration of the dissemination of information, the existence of the internet is able to erode distance and time, so that radical groups will use this facility to spread ideas that are contrary to Pancasila.

Radical groups have expertise in framing messages with propaganda models. As a result, the doctrine delivered is more embedded, faster and easier.

Spokesperson for the State Intelligence Agency (BIN) Wawan Purwanto said young people aged 17-24 were very vulnerable to being exposed to radicalism and terrorism, because in that phase they were still in the phase of searching for identity so they were easily influenced. In addition, they have relatively no dependents.

He also stressed many cases of terrorism such as suicide bombings involving young children because there are underlying factors. One factor is not critical in considering something including the swift flow of radical ideas targeting young people.

It also continues to make efforts to approach including families whose children are exposed to radicalism and terrorism.

There are about hundreds of young Indonesian people who had joined the ISIS group. He also said that the involvement of young people in radicalism and terrorism cannot be separated from the high unemployment rate, lack of opportunity, malfunctioning family structure and social exclusion.

Worse, some campuses both public and private, some students loudly spoke at the seminar on campus, that Indonesia is not progressing because it uses Pancasila as an ideology.

Radical understanding that continues to spread is also caused by textual understanding of the sources of Islamic law and the lack of interpretation of science in its context. This problem can be overcome by studying the correct Arabic.

One way that can be done to avoid exposure to radicalism is to never clash religion with Pancasila. Because after all Pancasila must be supported by religion. Because the five precepts in the Pancasila have been found in the holy books of each religion.

Radical understanding will continue to strive to spread the virus of hatred against Pancasila and the Republic of Indonesia, therefore strengthening the values ​​of Pancasila needs to be encouraged again so that people, especially young people, have protection against exposure to radicalism.

The Community Supports the Economic Recovery Program in the Pandemic Period