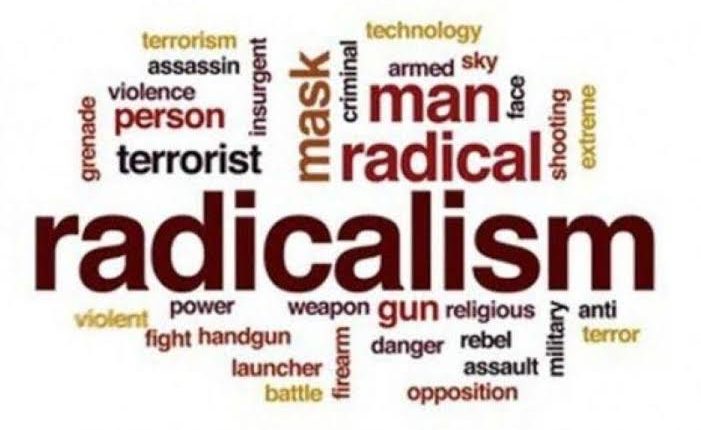 Understanding radical ideology can be seen from the views of individuals and groups of people who forbid interpretations that are different from their understanding, such as disbelieving fellow Muslims and also suppressing minority groups. A concerted effort is needed to break the chain of radicalism. Widespread radical ideology among young people must be aware and can be more dangerous than terrorism.

Radicalism itself in its form does seem soft because it does not cause direct violence, hence it does not attract the attention of the security forces and the community does not pay special attention.

In 2015, in a survey of The New Research Center revealed in Indonesia, about 4% of Indonesian people support ISIS, most of them are young people of productive age.

It can be said that it is quite easy for Indonesian citizens to join a group that calls themselves an Islamic state or ISIS in Indonesia. Moreover, ISIS has been approved by figures such as Abu Bakar Ba’asyir.

This is also reinforced by the many advertisements or information provided by ISS that promise ISIS followers high salaries or opportunities for jihad, this also triggers the rise of Indonesian citizens who are tempted to join ISIS.

The rise of sites in Indonesia related to ISIS is justified by a spokesman for the National Counterterrorism Agency (BNPT) Irfan Idris.

BNPT has tried to block these sites, but until now these efforts have not produced results. Moreover, radical groups still easily create websites and social media accounts for free.

On a different occasion, BNPT Chief Commissioner General Pol Boy Rafli Amar said that company employees were equipped with knowledge about the symptoms and indications of radicalism to break the chain of understanding.

This is because terrorism targets anyone or groups that span including private company employees.

In many cases in the work environment, the phenomenon of radicalism utilizes many closed spaces and exclusive activities that are difficult to detect and monitor.

In addition, the symptoms of radicalism in the work environment sometimes also utilize religious activities to instill exclusive, intolerant and anti-diversity doctrines.

Therefore this phenomenon must be immediately recognized, understood and given a serious portion of attention by policy holders in the work environment. Because if not, this phenomenon is very disturbing to a healthy corporate culture that instills cooperation and togetherness.

Boy Rafli also reiterated that there is no tendency to be suspicious let alone accuse radicalism in the environment of private companies. However, this prevention departs from the realization that no society is immune from the influence of radical ideology and ideology of violence.

Meanwhile, Chairman of the Indonesian Chamber of Commerce and Industry, Rosan Roeslani, MBA, hopes that private companies can participate as agents of the spread of peaceful values, anti-radicalism and conduct early detection in their environment.

To help fortify private companies from radicalism, including by facilitating counseling activities or discussions related to the pillars of nationality which include the experience of Pancasila, the 1945 Constitution, Bhineka Tunggal Ika and the Unitary Republic of Indonesia.

On different occasions, Indonesia also established cooperation with several countries and signed an MoU on preventing terrorism with other countries amid the co-19 pandemic.

Boy Rafli said the desired cooperation was related to capacity building, information exchange, and the preparation of a joint program for combating terrorism.

He also explained that Indonesia could not work alone to prevent and overcome the threat of terrorism, because the perpetrators had built networks with hard organizations from abroad, this issue would require cooperation at the regional and world level.

Meanwhile, terrorist observer from the Philippines, Rommel C. Banlaoi said, the moment of the co-19 pandemic could be used by a number of hard-line organizations to increase their propaganda and find new members through cyberspace.

Rommel said, the hardliners took advantage of the economic difficulties during the pandemic to recruit new members.

Radicalism spreads indiscriminately, let alone young people or civil society, even security forces such as the police can also be exposed to understandings that are contrary to this Pancasila. Efforts to deradicalize and counter narratives of radicalism are absolutely necessary in order to break the chain of spread of radicalism.

) * The writer is a citizen, living in Bekasi

Beware of Radicalism among Young People

Maintain Optimism to Avoid the Recession Impact from Covid-19