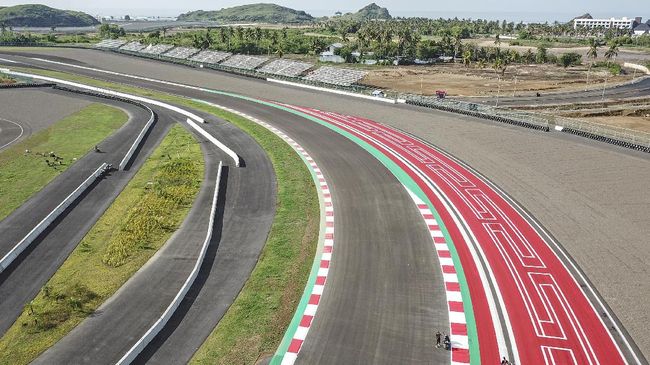 The Mandalika MotoGP is the first international motorcycle race to be held in Indonesia. The community was enthusiastic and supported the implementation of this prestigious event so that it ran safely and smoothly.

Indonesian people are very diligent in watching sports broadcasts, especially races. The reason is that they are championing each other for their favorite racers and feel the excitement when they see the impressions on the screen. Moreover, this year’s race will also be held at the Mandalika circuit, NTB, from March 18 to 20.

banners 336×280
The community was very enthusiastic because this was the first time that an international motorcycle race was being held in NTB. Moreover, the event is held in the midst of a pandemic, so they can get entertainment that can relieve stress due to fear of being exposed to corona. Those who have excess money and free time are also excited to watch the race live at the Mandalika Circuit.

Maya Watono, Marketing Director of InJourney stated that the public’s interest (to watch the race live) is indeed increasing. There have been more than 22,000 tickets sold and that’s only a third of the existing ticket stock. He reminded that the habit of Indonesians is to buy tickets just before the D-Day. So that it is confirmed that on March 18, all tickets will be sold out.

Maya added that there are two audience bases that will crowd the Mandalika Circuit, namely fans of Marc Marquez and Maverick Vinales. These two racers are indeed becoming idols because of their skills, and are potential young drivers.

Marquez fans will book tickets by sitting in a grandstand (premium class tribune), so they will see their idol from a closer distance. They will also have the opportunity to get a bonus in the form of original merchandise.

Meanwhile, Vinales fans chose to watch in other stands. They can also participate in giveaways with original merchandise from Vinales, in the form of t-shirts, hats, etc.

The enthusiasm of the public to welcome MotoGP must be appreciated because they not only watched from the television screen but also flew directly to Lombok to watch the race live. When else can you watch the race live in your own country? In the past, they could only watch it at home or if they had extra money, they flew to Malaysia to watch racing in Sepang.

When people are enthusiastic about coming to Mandalika, it will revive the tourism sector in Lombok, which was knocked out by the pandemic. Flights there will be crowded again, and followed by hotel occupancy which also rises. Especially during a pandemic, local tourists choose to stay in hotels rather than other places, because the standards of health protocols are very high.

In addition, people who flock to watch will also make culinary entrepreneurs in Lombok happy. They can open wide stalls for local and foreign tourists and sell plecing kale and other Lombok specialties.

Souvenir sellers are also splashed with sustenance from the race at the Mandalika Circuit because tourists will buy them, as souvenirs for their families at home. Souvenirs typical of Lombok as well as those with the theme of motorbike racing will sell well because of the abundance of local and foreign tourists in NTB.

Motorcycle racing at the Mandalika Circuit was greeted with great enthusiasm by the Indonesian people, because they had longed for good quality sports shows. In addition, residents also came directly to Lombok to see the magnificent circuit and the handsome Marc Marquez. The MotoGP race brings a lot of positive things to the people of NTB.

Strengthening Pancasila Values Prevents Radicalism in the World of Education