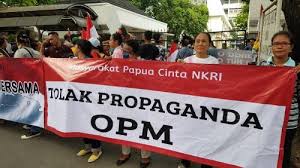 December 1 is the anniversary of the Free Papua Organization (OPM), this commemoration is an alarm for the Papuan people to raise awareness because the group often carries out brutal actions to demonstrate its existence.

The Free Papua Movement (OPM) is a separatist group that has never received the slightest sympathy from the public. They once took 1,300 residents hostage and resulted in a Brimob member being killed.

Finally, they carried out aggression against the security forces in the Intan Jaya area, Papua. These various incidents show that the OPM’s existence has gone too far, especially ahead of the OPM Anniversary commemoration on 1 December.

Colonel Czl IGN Suriastawa as the Head of Information for the Joint Defense Areas Command (Kapen Kobabwilhan) III stated that two TNI soldiers were attacked by the OPM while on patrol to create security and public order. Both of them were Pratu Firdaus and Pratu Arbi.

In this incident, Pratu Firdaus Kurniawan died while on duty, while 2 other colleagues were injured. This was revealed by the Commander of Korem 173 / PVB, Brigadier General Iwan Setiawan. Apart from the 2 wounded TNI members, there were also civilians who were shot victims.

Sebby Sambom stated that in the shooting, those who were responsible for OPM and TPNPB. The man who is the spokesman for the TPNPB (West Papua National Liberation Army) revealed that the reason was that the shooting was carried out because TNI members committed violence against Papuan civilians, so they protected them.

But Sebby’s defense appears to be just a baseless alibi. Because TPNPB does not aim to protect, but attacks the TNI who is looking for the existence of a separatist group. They do not accept that their group is arrested and considered to be rebels, because according to the TPNB and OPM, the legal country is West Papua, not Indonesia.

The TPNB apparently has a tradition of going down the mountain ahead of the OPM birthday on December 1. They not only appeared to promote the Free Papua Movement, but also spread terror. Don’t care about immigrants or fellow indigenous Papuans. All were terrified by the firearms they had.

Security in all regions of Papua was tightened ahead of December 1. Sweeping is carried out in many places and do not let anyone be caught raising the Morning Star flag or carrying it in a bag. Because the West Papua flag is a forbidden flag and is a symbol of the separatists.

Papuans are certainly obliged to be aware of the persuasion of the OPM. Don’t let anyone join with the excuse that being a member of the separatists will appear macho. Understand history that OPM is a rebel who violates the law and always causes trouble.

So far, the OPM is known as a group that wants Papua to separate from Indonesia because it considers that the Indonesian government has always negated Papua and only built Java.

However, these accusations are certainly baseless, this is evident where in the era of President Joko Widodo, Bumi Cenderawasih was very concerned with its specialties. Moreover, President Jokowi has succeeded in implementing a one-price fuel policy from Sabang to Merauke.

We also do not close our eyes to the disbursement of special autonomy funds (autonomy) for Papua which can support development in Papua, one of which is the construction of Sentani International Airport.

In the face of the OPM group that has returned to acting up, military and intelligence observer Connie Rahakundini assesses that it is time for the TNI to be given an operational role in the law (UU). Connie assessed that the OPM group’s actions had crossed the line. So that the government through the TNI / Polri security apparatus must take firm steps against them.

Responding to this, the Coordinating Minister for Political, Legal and Security Affairs Mahfud MD said that the state would not submit to perpetrators of all forms of criminal acts and security disturbances. He said clearly that the TPNPB OPM was a criminal group that had to be immediately accountable for its actions before the law.

The criminal acts committed by these separatist groups of course create anxiety and fear in the local community. This also interferes with the development being carried out by the Government.

The community certainly should not be easily provoked by groups wishing to separate from Indonesia. Because the problems in Papua must be tackled together, not with a skeptical attitude that leads to a desire to prioritize group interests alone.