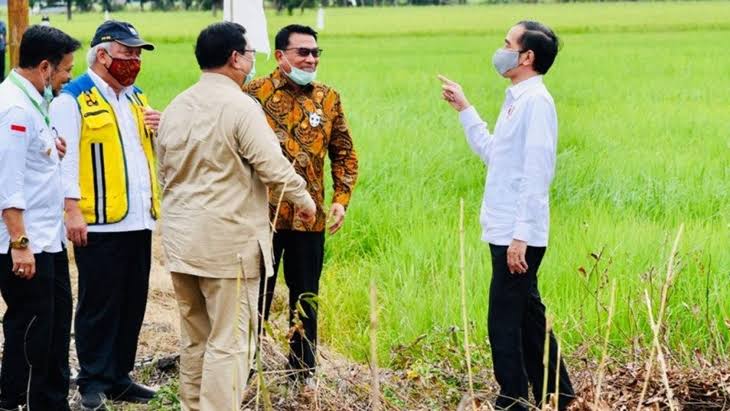 The National Food Granary is proof of the seriousness of the central government in realizing national and regional food security, to improve people’s welfare.

Sugianto said that he was ready to succeed in the development of the project, including through the construction of various supporting facilities and infrastructure needed.

He promised to increase road construction in the area in the form of asphalting. The aim is to support the development of national food security, namely the food estate, while at the same time making it easier for residents to carry out various activities.

This is of course a concrete form of provincial government support to the central government and the community in realizing the development of food security.

Food estate development is also believed to provide many benefits to various sectors, not only agriculture, livestock and plantations, but also for economic growth and infrastructure improvement.

On a different occasion, the Chairman of Commission V of the DPR, Lazarus said that his party fully supports the steps of the Jokowi-Ma’ruf Amin Government who want to maximize national food products in the midst of the Covid-19 pandemic through the development of production on former peatlands in Central Kalimantan.

Lazarus explained, peatlands are a national asset whose work has been started since the Soeharto era, and so far the community has also planted them where rice can grow well and produce, even though the results are not optimal.

One thing that Commission V reminds is that the Ministry of Agriculture should be really involved in ensuring how this land can be productive and maximized. Likewise with the involvement of the Ministry of Defense, Commission V sees that if there are personnel that can be mobilized to help it, this is certainly positive.

Previously, the Minister of Public Works and Public Housing, Basuki Hadimuljono, explained that the Government is preparing a food barn in Central Kalimantan.

The plan is for the project to be carried out on an area of ​​165 thousand hectares, even though the potential land area is around 295,000 hectares.

He also explained that initially there were three alternative development areas. Namely Merauke Papua, South Sumatra and Central Kalimantan. Finally, Central Kalimantan was chosen on the former peatland. However, this land was chosen where there was no peat, which is alluvial land.

Basuki stated that his ministry was not alone in working on the project, the Ministry of Defense was even involved because the food sector is a non-military defense sector. Then include BUMN that will cultivate 165 thousand hectares.

This support was conveyed by Nurdin when holding a gathering with the Minister of Agriculture (Mentan) Syahrul Yasin Limpo at the Indonesian Ministry of Agriculture Office, Jalan Harsono RM, Ragunan, South Jakarta.

According to Nurdin, the program must be supported by all parties because it has a much better agricultural future. For example, this support was encouraged by corporations and communities around Central Kalimantan or other related parties.

To make this plan a success, Nurgin hopes that there will be a synergy between the government and all stakeholders. So that the main objective of President Jokowi’s plan can be maximally achieved.

The Ministry of Agriculture also encourages the development of integrated agriculture (integrated farming) to support efforts to govern in realizing food barns.

This integrated farming pattern is integrated agricultural management, where in one stretch many commodities are cultivated, such as rice, vegetables, chicken, catfish, cattle and other food commodities.

The development of new food barns outside Java is currently in the process of being worked on and it is hoped that it can become a source of national logistics reserves to prevent shortages of domestic food supply.

This logistical reserve is also used to anticipate a food crisis as warned by the World Food and Agriculture Organization (FAO).

We should also support this step, because with the development of the new food storage, it is hoped that the national food reserves will be fulfilled and managed with good management so that it can be exported abroad.