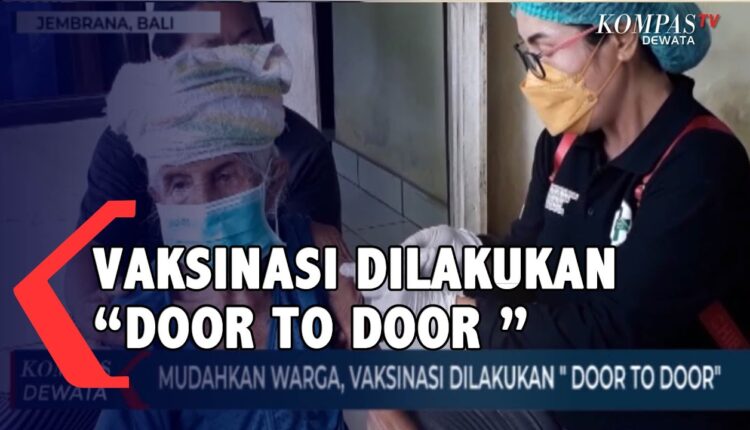 The public positively welcomed the door to door vaccination carried out by the State Intelligence Agency (BIN). This method is considered effective in accelerating community immunity as well as reaching people who have difficulty getting the Covid-19 vaccine.

Vaccination is one of the government’s efforts in accelerating communal immunity or herd immunity. To accelerate the realization of vaccination, the National Intelligence Agency (BIN) of West Sumatra took the initiative to carry out door-to-door vaccinations as an effort to pick up the ball by visiting people who were working in the fields for further vaccination.

Suwondo said that when they arrived at the field, the officers carried out socialization and it turned out that the community welcomed the arrival of the vaccine officers enthusiastically. .

Suwondo said the vaccination activities took place simultaneously in ten provinces where the Covid-19 epicenter was, including West Sumatra, North Sumatra, Riau, South Sulawesi and others. In Tengerang Banten, BIN also held a door-to-door COVID-19 vaccination. Residents who know about the activity are enthusiastic to wait for the vaccine queue.

One resident, Marisa, admitted that she welcomed the house-to-house vaccination, because it could prevent crowds. Marisa actually hopes that vaccination activities can continue and more people have been vaccinated, so that they can form herd immunity or group immunity.

Please note that the door to door system was adopted from several countries such as Africa, Georgia, the Philippines and the United States. It turned out that the door-to-door vaccination was considered the most effective, reaching up to 59-70 percent of the general population in their respective countries. It is hoped that this will also happen in Indonesia, therefore door-to-door vaccinations will continue to be carried out on an ongoing basis.

The house-to-house vaccination activity apparently received support from the Muhammadiyah Youth Center Head, Sunanto, who himself supported the State Intelligence Agency (BIN) which had vaccinated the corona virus (Covid-19) door to door. According to him, BIN’s steps will accelerate the vaccination process for the people of Indonesia.

The Muhammadiyah activist who is familiarly called Cak Nanto explained that the door to door vaccination carried out by BIN can also avoid crowds and long queues, especially during the implementation of the Emergency Community Activity Restriction (PPKM).

According to him, this method is effective for certain groups of people such as housewives who have difficulty leaving the house, including the elderly who are vulnerable to being exposed to the corona virus. With these vaccine efforts, of course, the effort to break the chain of transmission of Covid-19 can be accelerated. He also gave advice to BIN, so that this effort is also supported by increasing medical personnel in the field so that these efforts can really accelerate door to door vaccination .

In a different place, the East Java Regional Leadership Communication Forum (Forkopimda) launched dozens of ambulances to accelerate the handling of Covid-19. Not to carry sick people, these ambulances are a team of vaccinators who will visit the homes of people who have not received the vaccine. The vaccination ambulance was released by East Java Forkopimda officials at the East Java Police Headquarters in Surabaya.

The door-to-door vaccine is of course proof of the hard work of the government and its staff to accelerate herd immunity, people should not refuse when it’s time for a vaccine.