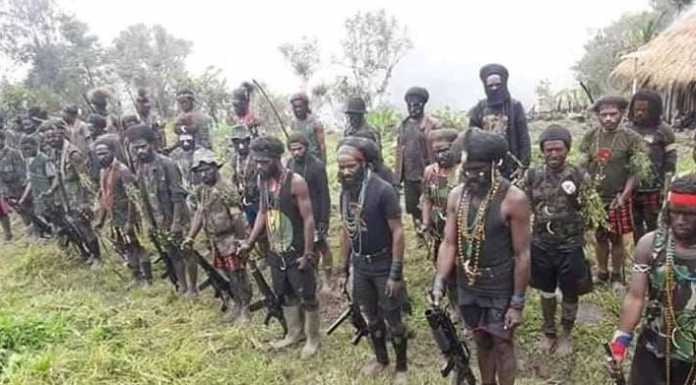 OPM became more violent by shooting innocent vocational high school students. Unfortunately, 2 of the 3 students lost their lives. The OPM atrocities were condemned by the community because they dared to shoot empty-handed youths. The community is increasingly antipathy towards KKSB and OPM.

The OPM (Free Papua Organization) has long been known to be tough in realizing its aspiration to separate itself from Indonesia. With the armed criminal group (KKB), the OPM spread terror among the community. The goal is that they will be invited to carry out separatist actions together.

But unfortunately the community is getting away from OPM because they were caught shooting 3 SMK students. It’s really sad because 2 of them died, while 1 survivor suffered wounds on the cheek. The incident occurred in Mundidok Village, Ilaga District, Puncak Regency, Papua.

Head of Information for Kogabwilhan III Colonel CZI IGN Suriastawa stated that the victims were indigenous Papuans. The chronology of these events is still being investigated so he does not know the cause. However, the investigation of this case was constrained by a very heavy terrain and an unstable signal from the mobile operator.

Head of Public Relations Kombespol Ahmad Mustofa Kamal explained the names of the victims, namely Manus Murib and Atanius Murib. Manus is a survivor, he is a student of SMK 1 Gome. Meanwhile, 1 other victim’s identity has not been revealed. They were evacuated to the big hospital in Timika because in Mundidok the medical equipment was incomplete.

After this incident, the community hates OPM even more because it has the heart to kill the vocational school children who still smell like kencur. The investigation had not yet produced results, but there were allegations that they were actually being seduced into joining the KKB troops. Because so far criminal groups have always recruited teenagers so that there is regeneration in their organizations.

The community also condemned the OPM for shooting Papuan civilians. Why do they have the heart to take the lives of their tribesmen? OPM and KKB have lost their sense of humanity and want to realize their dream of liberating Papua, at the expense of many citizens. Even though they were clearly innocent, they were banned because they didn’t want to be invited to be pro-OPM.

The community was angry with the OPM because they insisted on independence. Even though they already love NKRI. Especially now that Papua has progressed further, since Indonesia was led by President Joko Widodo. The proof is the Trans Papua Road and many other infrastructures, which have become symbols of progress on the Earth of Cendrawasih. Papuans are also proud to be part of the Republic of Indonesia.

OPM seemed to close its eyes to these facts, and insisted on raising their pride flag bearing the Morning Star logo. Moreover, OPM’s birthday will soon be on 1 December. They secretly distributed the flags, from small to large sizes.

There is a tradition of ‘going down the mountain’ when OPM is birthday and KKB is deliberately deployed to destabilize peace in Papua. They spread terror and force people to defect, with the threat of sharp weapons. The joint military and police apparatus were deployed to supervise and secure every area of ​​Papua. The public is also increasingly alert.

The existence of the OPM and KKB made the community antipathic because they always insisted on their will and even had the heart to shoot innocent citizens. When the victim was a teenager, the Papuan people were sad, because he had lost his life and his future. Eradicating OPM and KKB is the focus of TNI members so that Papua will be more peaceful.

) * The author is a Papuan student living in Semarang