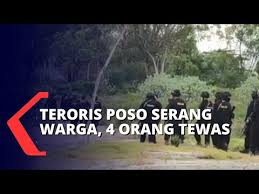 Condemning the Brutal Actions of Terrorists in Poso

The terrorist group in Poso again committed cruelty by killing 4 peasants. Their brutal actions are certainly condemned by the community, especially during the fasting month. They should have maintained the sanctity of Ramadan but instead took the lives of others at will.

May 11, 2021 is an unlucky day for 4 farmers in Poso, because they became victims of the atrocities of unknown people, who are suspected of being members of the MIT terrorist group. The peasants died tragically. The public was furious because the terrorist groups carried out their actions in a very cruel and inhuman way.

The Office of the Presidential Staff (KSP) strongly condemns the actions of the MIT terrorist group. They also promised to send troops immediately , to arrest the terrorists and maintain the safety of the citizens. This was disclosed by Deputy V KSP Jaleswari Pramodhawardani.

Jaleswari continued, in accordance with President Jokowi’s mandate, there should no longer be a place for terrorists in Indonesia. The government will take firm action against terrorist groups, whether in Poso, Papua, or elsewhere.

The terrorist acts in Poso have indeed crossed the line, because they could cut off the victim’s head. Why would you commit murder in that way? Terrorists did memil iki mindset which is wrong, and therefore they should be eradicated completely. The goal is that there are no more civilians who become victims and that peace is created throughout Indonesia.

If viewed from its history, the MIT terrorist group in Poso is an ‘export’ and is a derivative of another group, namely JI. Meanwhile JI was the perpetrator of the 2001 bombings in Bali. MIT was in Sulawesi with the aim of dealing with communal conflicts. However, their existence did not address the conflict, but only exacerbated the division there.

As a terrorist group, MIT has always resorted to violent means in carrying out its mission, for example by killing and bombing. In fact, the suspect in the bombing case at a house of worship in Makassar some time ago was suspected of being a member of MIT. They are very organized and do the regeneration neatly.

MIT is very sneaky because it takes advantage of the situation in Poso which still has a majority of virgin forests, so it is rather difficult to catch them. However, the authorities did not just give up . They are still looking for where the MIT headquarters actually is, so that terrorism in Indonesia is eradicated from its roots.

After a cruel incident in Poso, the number of officers on guard will be increased. First, for the terrorist capture mission to be 100% successful . Because if they are allowed to feel jumawa and do the action again and again. The MIT atrocities are included in premeditated murder, so they are on the wanted list by the authorities.

Meanwhile, the second objective of adding personnel in Poso is so that the community will no longer be afraid to do activities, because there is a threat from terrorists hiding in the wilderness. Do not let the terrorists appear to control Poso and other areas in Sulawesi. Because it is tantamount to waging war in Indonesia.

The public is also asked to cooperate and report any suspicious strangers. This is not paranoid, because they could be members of the MIT terrorist group or something. If someone claims that he is a terrorist, just call the authorities to make an arrest.

Conflicts between civilians and members of terrorist groups are getting hotter. MIT terrorists must be expelled, not only from Poso, Sulawesi, but also throughout Indonesia . The government also intensively eliminates terrorism in this country, so that peace can be created and there will be no riots.