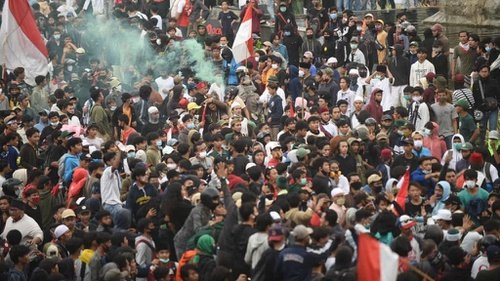 October 28, in commemoration of the youth oath, there will be another demonstration against the omnibus law for the umpteenth time. Even though it is clear that this activity is dangerous, because it is vulnerable to creating a new corona cluster. The community is not sympathetic to the demonstration because it interferes with their activities.

The 2020 youth pledge coincides with a long weekend. Masyar a kat been warned by health workers and officials to sit at home alone in order to be aware of the mass waves outside who would vacation together. However, there are those who are stubborn and don’t go on holiday, but instead plan a demonstration to reject the omnibus law.

This time the demonstration was organized by the student executive board of Indonesia (BEM SI). The students argued that the omnibus law hurt the fate of the people. Even though P resident Jokowi has made a speech to explain this law and hoaxes circulating in the community. But somehow the students still believed the fake news.

If there were students who were brave enough to go to the front of the DPR building to demonstrate, the authorities had stopped them from the start. Starting from the station to other important points, such as around the campus, the officers are on guard so that they do not walk to shout their aspirations. If there is a suspicious gang, they are immediately told to disperse and just go home.

Banning demonstrations does not mean silencing. But the main reason is that it is currently still a pandemic, so it is prone to causing a new corona cluster. Of protests last October 8th, there are 12 people who got the virus positive covid-19, after testing rapid by health workers. If there is evidence like this, why do you dare to do another demo? Like entering a lion’s den.

The students could argue that more people were healthy than those who contracted the corona at the demonstration. However, this statement was rejected by Doctor Wiku. According to the spokesperson for the Covid Task Force Team , the Covid-19 reaction is sometimes seen only after 2 to 4 weeks. So that the demonstrators who looked healthy, turned out to be infected with the corona a month later.

Moreover, when the demo yesterday, who tested rapid only 100 people. Meanwhile, the number of protesters is 5 to 6 times that. The rest of the demonstrators may have already gone home or refused and ran helter-skelter when they were going to be tested rapidly . It could be that they have the status of people without symptoms (OTG) and in danger, if they do not test swabs or rapid independently to the hospital.

These OTGs are very dangerous because they can transmit the corona to fellow demonstrators. Especially during demonstrations there is no protocol to keep your distance and many people tend to take off their masks because of their heat. Transmission can also occur when they share bottled drinks or eat in 1 pack of rice. Because the droplets will mix together.

OTGs can also spread it to food and beverage vendors around the location, bus drivers , to their families at home. Meanwhile, the tracing of OTG tracks is rather difficult, because they are not neatly recorded, and it could be that only students live in boarding houses. So that the address on the KTP is different from the domicile address.

When demonstrators got corona and suffered in hospital, did they regret it? It could be that they are only invited by their friends and don’t know what the omnibus law actually is. But I want to take part in the demo because I want to look manly and cool.

If you have this, would anyone want to go back to the demonstration arena and be at a big risk of getting sick with corona? Love your life, do not be reckless to protest. Finally, only tired, thirsty, hungry, and driven away by the authorities. Moreover, President Jokowi has invited all Indonesian citizens to report the omnibus law to the Constitutional Court, so there is no need to protest again.