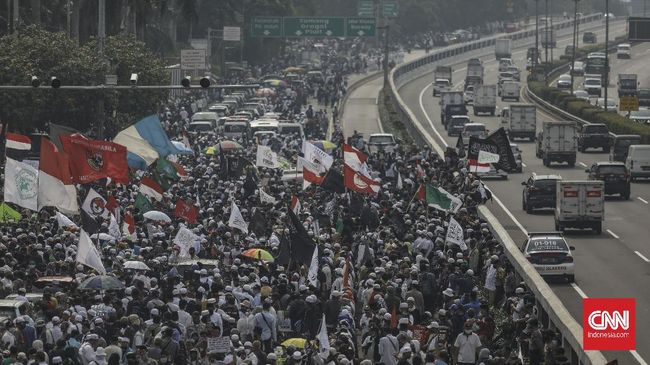 Not the Alumni Brotherhood ( PA ) 212name if it does not miss the action took to the streets. Even the group that has an annual reunion agenda plans to hold a rejection of the draft Pancasila Ideology Bill (HIP) volume . The community also rejected the action because it could accelerate the transmission of Covid-19 Virus, which has not yet found a cure.

The 212 Alumni Brotherhood will again take to the streets on July 5, 2020 for a demonstration. The second volume is expected to be attended by a larger mass of religious defense who wanted Ahok to go to jail a few years ago.

Bakmumin’s novel as the Chair of Media Center PA 212 said, that his party was not tired of rejecting the HIP Bill. Even claiming to be mobilizing more masses in the demonstration rejects the 2nd HIP Bill.

The HIP bill itself has not actually been discussed further by the government, because at this time the government is still focused on dealing with the 19th plague and preparing a new normal order. If the mass action is more than the previous action, of course it is not impossible that this has the potential to cause a second wave of covid plague.

In fact, Indonesian President Joko Widodo has stressed that he did not send a presidential letter (surpres) as a sign of approval of the discussion of legislation on the HIP Bill to the DPR. The central government also did not interfere with the proposed bill which was purely an initiative of the DPR.

Jokowi also admitted that he had not yet decided to issue the presidential decree. He also always paid attention to the voices of the people in discussing a law.

In a closed meeting at the Bogor Palace, Jokowi has firmly committed to closing the door to communism in Indonesia.

Even this step tends to be excessive, especially if there is a party flag burning. Of course there is a logic flaw if a party in Indonesia is considered a symbol of the PKI. Even though we all already know that communism will not have a place in Indonesia.

Initially, the HIP Bill was intended to strengthen the ideology of Pancasila. So that the proposed HIP bill is expected to open a healthy dialogue space, not with hate narratives let alone burn the flag.

If indeed the HIP bill is counterproductive, of course there are still constitutional steps for the government or the DPR to stop the discussion. But it is the spirit in providing a legal umbrella in the form of the BPIP Law that needs to be supported, because it involves issues of national ideology.

It should be noted that the current position of the Pancasila Ideology Development Board (BPIP) is only regulated by a Presidential Regulation, so it must be strengthened by laws so that it is not easily dissolved by the next government.

Of course we all know that mass organizations such as Muhammadiyah and NU have explicitly rejected the existence of the HIP Bill. However, the rejection does not mean that it must be conveyed with action on the streets. Because it is an exaggeration.

Especially if the action raises a narrative that the DPR or the Government wants to open a gap for PKI revival. Of course that is very excessive.

Central Java Governor Ganjar Pranowo, who is one of the PDI-P politicians, strongly denied the accusations about his party having the same understanding as the PKI.

Ganjar said that he had been a PDI for a long time, his side also did not agree with the PKI, because it was in line with the constitution and the country’s foundation.

He also said that the issue raised in the HIP Bill Problematics was a patch to provoke mass anger.

Ganjar also said that disagreeing with something is certainly permissible, but do not let it damage, because surely there are those who do not like the current political conditions.

The mass action that will be held by PA 212, may not be a form of their concern for Pancasila, but as a momentum for those who long to take to the streets because 2 December is still long.

Instead of holding volumes of action, it is better to file an appeal elegantly, not with actions that cause hatred. Moreover, the status of the pandemic has not yet been declared to be over, of course this action is an overt action in violating the health protocol. If this second action later triggers a new cluster of covid-19 deployments, wouldn’t this bring mudhorot?