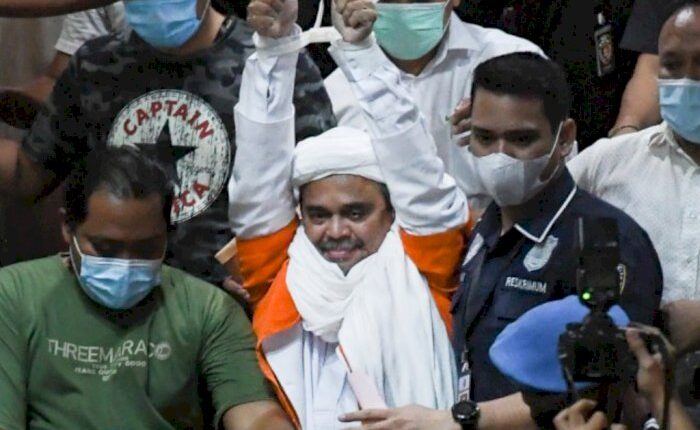 Examination of Ex FPI Figures Regarding Prokes According to the Rules

By: Firza Ahmad) *
The former FPI leaders were questioned by the police regarding the crowd case in Petamburan. Not only Rizieq Shihab was a suspect, but also other officials. They were arrested for being on the committee and for violating health regulations and protocols. The examination is guaranteed in accordance with Indonesian law.
Rizieq Shihab shocked the public by recklessly holding a wedding party for the daughter, Najwa, last November. The problem is, he invited 10,000 people, even though it was still a pandemic period. He was eventually arrested for violating health protocol and being bound by articles of the quarantine law. Then you have to stay in jail to take responsibility for your actions.
Apart from Rizieq, in the crowd case in Petamburan, there were also other suspects. The two people are Ahmad Shabri Lubis and Maman Suryadi, who are former FPI officials. They were named suspects because they were part of the committee at the party. So the police were called and received an arrest warrant.
Examinations of former FPI leaders were carried out in December 2020. Ahmad Shabri and Maman Suryadi finally wanted to come to Polda Metro Jaya and had to answer 56 questions from investigators. Their lawyer, Sugito Atmo Prawiro, stated that when he was questioned, he was only asked what role he played in Rizieq Shihab’s daughter’s wedding.
Kombes Yusri Yunus, Head of Public Relations at Polda Metro Jaya, stated that they were questioned for violating Article 93 of Law number 6 concerning health quarantine. The threat of a year sentence. Even though they were named suspects, they were not detained like Rizieq. However, he was only obliged to report twice a week, with an arrest warrant.
The examination of the two former FPI leaders was in accordance with the rules, because they were not immediately arrested and then put in jail. Ordinary people do not imagine evil like that. But the procedure is, there is a summons from the police, checked, then the status is determined whether they are worthy of being made a suspect.
When the two former FPI leaders are only subject to compulsory reporting, as a form of detention suspension. This is in accordance with Article 31 paragraph 1 of Law number 8 of 1981. They may not go to prison, but on the condition that they must comply with the compulsory schedule to report and bring the necessary documents.
When there is a procedure like this, it shows that the investigation of the Petamburan crowd case and the process of examining the two former FPI leaders are in accordance with the applicable rules and laws. They are willing to come and answer police questions (and not run away like Rizieq Shihab did a few years ago).
Although their lawyer threatened to file a pretrial lawsuit, the police were not afraid. Because they are sure the judge will do the fairest possible. The proof, a single judge at the South Jakarta district attorney’s office rejected Rizieq Shihab’s pretrial lawsuit. He will certainly do the same when facing the former FPI leader.
How can FPI take the case of the crowd lightly and insist that their pretrial lawsuit be granted, and claim that the investigation is not in accordance with the rules? Do they have amnesia that it is still a pandemic? So it is strictly forbidden to hold a wedding party that invites many people, because it violates health protocols.
Besides, they cannot play the victim and think the procedure is unfair. Logically, if you don’t want to get suspect status, don’t break the rules arbitrarily. When the officers arrested him, he got angry and asked for justice. Even though they were the ones who were unfair, because it resulted in 80 people being affected by corona after the party in Petamburan.
Just give up the drama from the former FPI leaders and accept the case gracefully. The police have conducted an investigation and everything is in accordance with Indonesian procedures. Hopefully the mandatory report sentence will make them aware that FPI is truly a banned and arrogant mass organization.

Without Compromise, the Government Actions Decisively on KKB Papua