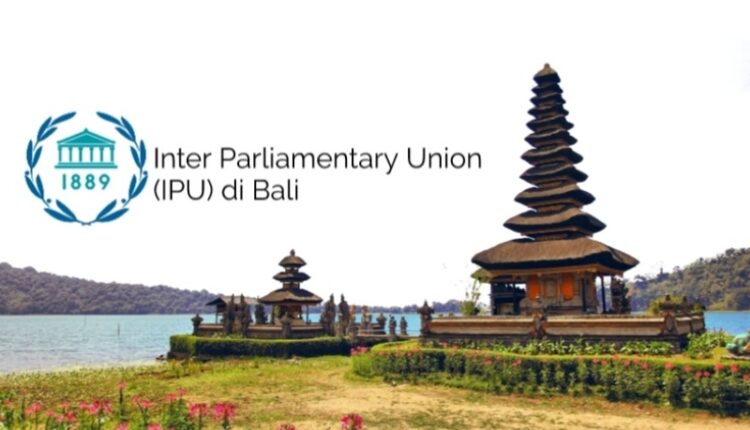 The Inter Parliamentary Union (IPU) will be an important agenda awaited by foreign parliaments. The holding of the IPU is also expected to encourage the creation of world peace.

The House of Representatives’ Inter-parliamentary Cooperation Agency (BKSAP) will utilize the 144th IPU which will be held in Bali on 20-24 March 2022 to encourage the creation of world peace in eastern Europe with the situation of the Russian military invasion of Ukraine.

banners 336×280
The enthusiasm of foreign parliaments is evidenced by the fact that 87 countries out of 178 member parliaments have confirmed their presence in Bali. Putu Supadma as Deputy Chair of the Indonesian House of Representatives BKSAP said several Indonesian ambassadors in several friendly countries had conveyed that their parliaments would attend the 144th IPU in Bali.

For the presence of the delegation in Bali, according to Supadma Rudana there is no problem. Because the DPR RI BKSAP has met with the Ministry of Foreign Affairs and the Coordinating Minister for Maritime Affairs and Investment (Menkomarves) Luhut Binsar Pandjaian, so that the quarantine for tourists traveling to Bali is abolished. Because Bali is supported by traditional villages and stakeholders have managed to handle the Covid-19 pandemic to the maximum, aka the process in Bali is very maximum.

On the other hand, the stage 1 and stage 2 vaccination rates have already reached more than 100 percent, booster vaccinations are currently underway. The central government’s support for Bali for the maximum Covid-19 pandemic has also made active cases in Bali low.

Supadma Rudana has also invited members of the world’s parliaments in every visit of the Indonesian House of Representatives BKSAP delegation to Europe and America, to attend the 144th IMU in Bali. He said that his party had invited and promoted Bali to Balkan countries such as Bosnia, Serbia, Montenegro, etc.

Supadma added, in the world parliament meeting which will be held in a bubble in the Nusa Dua area, Bualu village. This South Kutai District, Badung Regency, apart from discussing environmental issues, the green economy, will certainly be driven by the resolution of current issues.

Supadma emphasized that the 144th IPU Moment in Bali will be an important moment, especially with regard to matters that fight for national interests, both related to trade and the sovereignty of the Republic of Indonesia. The current issue is related to pushing for peace in the Eastern European region which can have a negative impact on the world due to the effects of the wars between Russia and Ukraine.

He said, based on article 76 of the Regulation of the House of Representatives of the Republic of Indonesia No. 1/DPR RI/2009-2010 concerning Order, BKSAP, in an effort to support the creation of world peace, the BKSAP of the DPR RI has the task of fostering, developing and enhancing friendly relations and cooperation between the DPR. and parliaments of other countries, both bilaterally and multilaterally, including international organizations that bring together parliaments and/or members of parliament from other countries.

He explained that the issue of world peace overcoming Russia’s war with Ukraine would be a new issue. Others, of course, have discussions on cooperation in handling the Covid-19 pandemic for the sake of recovering the world economy. Previously, the Speaker of the Indonesian House of Representatives, Puan Maharani, had explained that the 144th IPU general assembly should send a strong message that parliament is always ready to be part of the solution to solve the biggest challenges facing the world today. Puan said that 2022 is an important year and determines whether the world can get out of the Covid-19 pandemic.

On the occasion of the 143rd IPU Closing in Madrid, Spain. Puan also said that Bali was the right place for the IPU general assembly to be held. He also boasts of the excellence of the tourism sector on the island of the Gods.

Puan also had time to convey an invitation to the 144th IPU general assembly through video viewing. Then he received a warm welcome from IPU members, including the Chair of the Spanish Parliament and the President of the IPU who congratulated and hoped that the 144th IPU General Assembly in Bali would be successful.

A number of IPU members also came to the table of the Indonesian delegation. They also conveyed their commitment to come to Bali in order to attend the 144th IPU General Assembly. The IPU is an important agenda for discussing world problems, so the enthusiasm of foreign parliaments is of course a distinct advantage for Indonesia, which this year is hosting the 144th IPU.