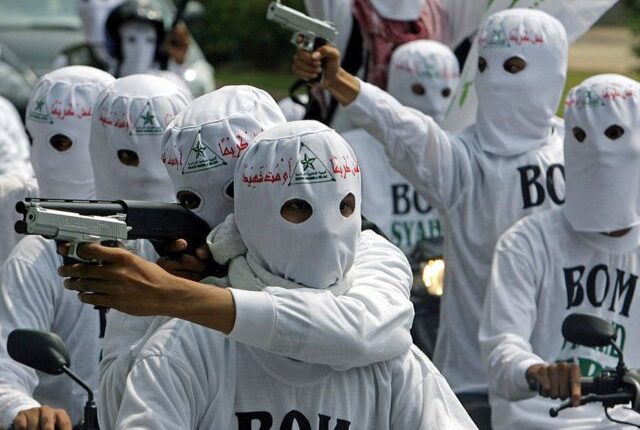 By: Firza Ahmad) *
The government has officially dissolved the Islamic Defenders Front (FPI). Apart from not being registered at the Ministry of Law and Human Rights or the Ministry of Home Affairs, FPI is indicated to be involved with radical movements, so it is necessary to prohibit its existence in Indonesia.
Previously, 26 suspected terrorists from Makassar and Gorontalo were brought to Jakarta. Some of the terrorists appeared to be members of the FPI. The police have also said that 19 of the 26 members caught were all involved or were members of the FPI in Makassar. Where, they are said to be very active in FPI activities there.
Related to this, a University of Indonesia (UI) intelligence and terrorism observer, Ridwan Habib, revealed what factors made the dozens of FPI members choose to become terrorists.
According to him, there was dissatisfaction as long as they were in the FPI organization they joined. Like the extent of the struggle that was penetrated. Due to this they feel something that is not satisfying themselves.
Ridwan said that on average they were not satisfied with the existing organizations and felt that they were further involved, such as making weapons and being involved in war.
He said that the peak of a number of FPI members being affiliated with terrorist groups was during the euphoria of the emergence of the Islamic State of Iraq and Syria (ISIS) in 2015. However, after it was discovered that the ISIS line of struggle to kill fellow Muslims, FPI turned away.
The FPI’s attitude towards ISIS was then responded to by the members. For members who are very militant in spirit, then they choose to join radical groups such as Jamaah Ansharut Daulah (JAD).
So that the involvement of FPI in the Radical Movement, of course, becomes an appropriate basis for the government to dissolve FPI.
On a different occasion, the head of law and human rights, PP Pemuda Muhammadiyah, Razikin considered that the government’s move to officially dissolve FPI’s mass organizations was believed to have gone through a comprehensive study.
He views that the government’s move to ban all FPI activities is the right step. Because he sees that the mass organization founded by Habih Rizieq is increasingly showing various actions that violate the law.
He saw that FPI itself tended to stay in democratic facilities that collided with the basic principles of democracy itself.
However, Razikin considered that there were things that were far more important than just the polemic of the dissolution, which he considered needed to be scrutinized by all parties, where recently the symptoms of radicalism were getting stronger in Indonesia.
He observed that FPI seemed to provide room for the seeds of radicalism and extremism to grow. The question is whether FPI deliberately opened this space, or was FPI not aware of this.
Since the existence of FPI, some people have started to dare to say kafir and kafir, not only to adherents of other religions, even Muslims who are said to be kafir.
Especially if they support the implementation of the Khilafah in Indonesia. This of course will be very dangerous if left unchecked. We certainly believe that Pancasila is the final state foundation and cannot be replaced by any ideology.
So that if there is a group of people who have thoughts about changing the basis of the Republic of Indonesia, this is certainly far deviant and dangerous, this is because Pancasila as the basis of the state has ‘changed’, then automatically Indonesia no longer exists and is no longer Indonesia.
Before the FPI was officially dissolved by the government, the Chairman of the DPP LPMI Abdillah Zain said that it was not once or twice that the public voiced the disbandment of FPI. This Islamic organization made by Habib Rizieq is considered to always display radicalism in the midst of a climate of public life that wants diversity.
Jejak Digital is also still recording the term “cut the neck” which Habib Rizieq uttered for blaspheming religion. Of course, this exclamation was just one of the many harsh words that HRS often mentioned in a number of speeches that tended to be provocative.
The DPP LPMI also strongly criticized the FPI for deliberately disobeying the rule of law in Indonesia.
In 2012, the Minister of Home Affairs (Mendagri) Gamawan Fauzi at that time also considered freezing the mass organization, this was because he had not been able to forget the mass anarchist action of the FPI during a demonstration rejecting the evaluation of the nine alcohol regulations on January 12, 2012. At that time, a number of the glass of the Ministry of Home Affairs was destroyed by the anarchist action.
Of course, FPI’s anarchic actions cannot be tolerated, this has actually become a zone for the growth of the seeds of radicalism that could threaten the integrity of the Republic of Indonesia.

The Napun Gette Dam is Beneficial to the People