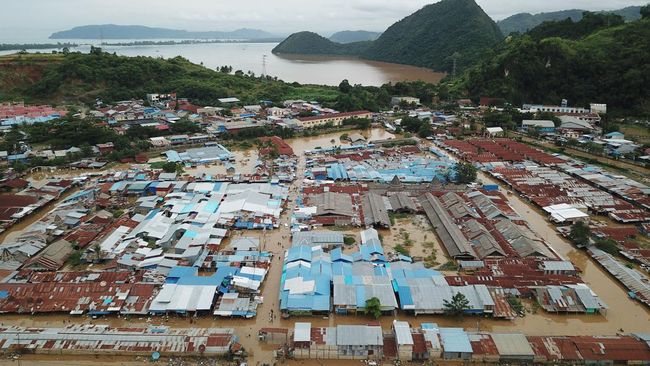 The government is trying hard to maximize the prevention and evacuation of flood victims in Jayapura-Papua. With this fast movement, it is hoped that the handling of victims can be optimal.

In the last few days, Jayapura was hit by floods and 7 people lost their lives. Floods occurred in several districts, such as in Abepura, Heram, Muara Tami, and South Jayapura. Hundreds of houses were submerged in water but there is no need to worry because the residents have been evacuated by the Papua Regional Police’s rapid response team.

Vice President KH Ma’ruf Amin asked the National Disaster Management Agency (BNPB) and the Ministry of Social Affairs to overcome the impact of flash floods and landslides that occurred in Jayapura. In a sense, the rescue of flood victims must be done quickly so as not to cause more casualties. In addition, evacuation of children and the elderly is also mandatory as soon as possible because they are at high risk of drowning.

Vice President KH Ma’ruf Amin continued, in addition to covering the banjir bandang, an investigation must also be carried out on what causes the flood. So that the cause will be known and how to prevent it from happening again. The reason is because if there is another flood, there are fears that there will be casualties from civilians.

According to the BMKG (Meteorology, Climatology and Geophysics Agency, flash floods occurred because of the high rainfall in Jayapura City, and since January 6, 2022, there have been cumulus and cumulonimbus clouds that carry a lot of water in them. This condition is exacerbated by the trick of the moonsoon winds). from Australia which brings high humidity.

The flood this time recorded a record because it reached a height of 1.5 meters so that evacuations had to be accelerated. Not only the houses of residents who became victims, but the office of the Governor of Papua was also flooded.
It was reported that more than 500 residents were displaced due to the flash floods. They were evacuated and placed at the Emergency Handling Command Post at BPBD (Regional Disaster Management Agency) Jayapura City. There is already a shelter for residents as well as a public kitchen so they are not confused about where to find food.

At the post, it is really arranged so that the refugees are safe, because it is the rainy season so they don’t get sick, ranging from itching, diarrhea, colds, etc. The refugees were not only given blankets and food but also light medicine and eucalyptus oil.
In addition, because it is still a pandemic, refugees must be given masks in order to comply with health protocols.
Keeping a distance when they sleep should also be done. This is intended so that after the evacuation, the number of corona patients in Jayapura increases, because there is an evacuation cluster. Therefore, from the rapid reaction team, volunteers, and medical personnel alike remind each other to obey health protocols.

Flood control was also carried out at the location so that there were no residents who had not been evacuated so that the Papua Regional Police’s rapid reaction team continued to comb with rubber boats so that everyone could be saved.

After the flood subsided, the Papuan local government focused on post-disaster management, starting from cleaning the governor’s office and residents’ houses, repairing (if any part was damaged), providing compensation to former refugees (because they couldn’t work when they were flooded), etc.

The flood disaster in Jayapura, Papua was quite surprising because it submerged the office of the Governor of Papua. Evacuation of residents is carried out quickly to minimize injuries and lives. People who are displaced will receive various assistance, and they must still maintain health protocols, so as not to give rise to new corona clusters.

Beware of the Spread of Radicalism Among Children