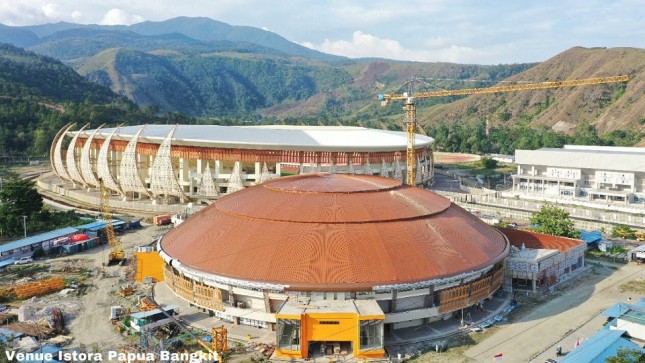 Building Papua is indeed full of challenges, but that does not mean that development in Papua should be abandoned, because after all Papua is an inseparable part of the Republic of Indonesia. Until now, President Jokowi has optimally developed Papua as a concrete step in advancing the region.

Head of Bappenas Suharso Monoarfa said that his party had mapped out the fundamental challenges in Papua and West Papua in 2020-2024. This mapping is at least the basis for efforts to accelerate development in the two provinces. According to Suharso, there are three challenges faced by the Provinces of Papua and West Papua. Namely, the challenges faced in the global context, namely the 2030 Sustainable Development Goals (SDG’s) targets, environmental issues and international attention related to human rights issues. Meanwhile, in the national context, Papua is faced with the challenge of ending the Special Autonomy policy in 2022 and the need to integrate policies and programs of Ministries / Institutions for Papua and West Papua.

From a regional perspective, Papua is faced with a low level of poverty and the Human Development Index (HDI). The poverty rate in Papua is 26.55% and West Papua 21.51 or is the highest poverty rate in Indonesia. HDI in 2019 is 60.84 or the lowest in Indonesia, weak management of the implementation of special autonomy, economic disparities between regions in the coast and in the mountains in Papua, security issues in mountainous areas and demands for dialogue with Jakarta. In order for the development program to be more optimal, of course, a conducive political, legal and security situation is needed.

Before President has also issued Presidential Instruction (Instruction) No. 9 of 2020 on Accelerating the Development of Welfare in Papua and West Papua became the foundation for the government’s commitment to the root of the problems experienced by the people of Papua.

Suharso conveyed that there were 4 approaches to support the implementation of the Presidential Instruction. First, using the welfare approach, namely by ensuring a policy of accelerating development based on seven customary areas and selecting priority activities as “windows” that are quick wins and integrated.

Second, the Political and Security Approach, namely strengthening the implementation of Law 21/2001 on Special Autonomy through the revision of the Special Autonomy Law, exploring and implementing the formation of new provinces. Religious policies that respect local wisdom and human rights in the spirit of the Republic of Indonesia.

Development in Papua, especially in terms of infrastructure and human resources, continues for the advancement of this Cenderawasih Earth. One of the developments being optimized is the sea highway, in which the Ministry of Transportation cq the Directorate General of Sea Transportation is committed to continuing to optimize the Sea Toll program, especially in Papua. This is useful to reduce the price disparity that has been occurring for a long time in the easternmost region of Indonesia.

Jayapura Regent Matias Awaitouw gave his appreciation for the performance of the Ministry of Transportation which has presented the Sea Highway in his area. “This is a form of the seriousness of the Ministry of Transportation. He revealed that the Port of Jayapura, which is in the center of Jayapura City, is the center of the largest and most crowded port. In fact, it is very busy to serve almost all districts / cities in Papua Province and directly adjacent areas such as Keerom Regency, Sarmi Regency, Membemarmo Regency and other districts, that up to neighboring Papua New Guinea.

Meanwhile, Expert Staff to the Minister of Transportation for Logistics, Multimodal and Transportation Safety, Chris Kuntadi, said that the Sea Highway in Papua is in line with the implementation of public obligation services for pioneer vessels. It is also part of the supporting elements of the Sea Highway and also the construction of people’s ports and pioneer ports . With the construction of this multimodal transportation, of course, it is a new hope for people in mountainous areas to be able to get cheaper prices for basic necessities.

This optimal development is of course a form of government concern for underdeveloped, outermost, frontier and border areas. The presence of this breakthrough is also an effort of the government in realizing justice in development through the indicator of the price of national goods in the central highlands of Papua regardless of distance and access problems in accordance with the characteristics of the region.

Expansion of the Papua Region is the Right Step