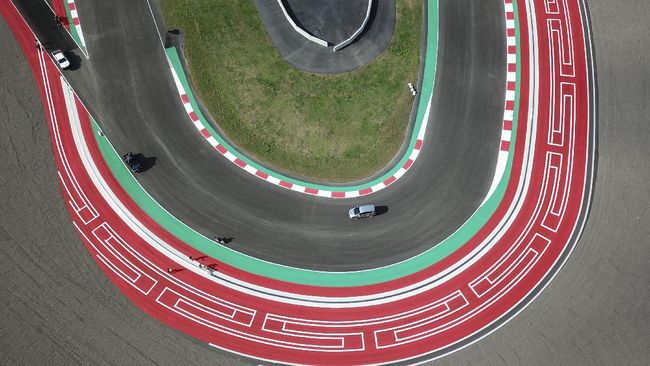 The Mandalika MotoGP held in Lombok is a prestigious international race. The government also tried its best to secure the event by deploying many personnel from the ranks of the TNI/Polri.

Racing is a sport that is quite favorite in this country as well as entertainment, because it presents tension and surprise and pleasure when the hero wins. No wonder every motorcycle racing match is liked by viewers on television. They cheered even more when Indonesia finally had an international-class circuit in Mandalika, Lombok, and waited for the official race to start.

Security around the Mandalika Circuit has been tightened. First, this is a prestigious international racing event, so don’t let it fail because of criminal interference. The pickpockets have also been secured so that the audience does not lose valuables. This prevention is reasonable to do so that there are no victims who lose.

Second, in this race the name Indonesia is ‘sold’ so that it will attract the interest of the world community to travel to Lombok and other areas, after watching the race broadcast. Moreover, the Mandalika Circuit has standards that are equivalent to other international circuits, so that if there will be another race, it will attract many foreign tourists to watch it live.

The National Police Chief General Listyo Sigit Prabowo checked directly at the Mandalika Circuit, Lombok, NTB, to see the readiness of the MotoGP pre-season test. Its readiness consists of implementing health protocols, bubble systems, and security patterns. The goal is for international events to run safely and smoothly.

To enforce the health protocol, starting from the entrance to Indonesia, the drivers and their teams are required to quarantine in Jakarta, in accordance with applicable procedures. After that they just drove to the hotel near the circuit that has been designated for lodging the race participants. In addition, antigen swab tests are also carried out every day, to make it safer because currently it is still a pandemic.

The bubble system is also considered so that there are no drivers who violate. With this system, there is a limit to how far they can get out of the arena. Indeed, at first glance it will not be free because after the race they cannot get around Lombok to travel, but this bubble system is designed to protect them from corona.

General Listyo continued, to secure the Mandalika Circuit and its surroundings, 1,598 joint teams of TNI and Polri and other stakeholders were deployed. Later the number of personnel can be added, adjusting to the circumstances. In a sense, for an international-class event, it is very natural for a large number of security forces to be deployed, not to frighten the people of Lombok but to protect them.

That many personnel are certainly needed so that the race takes place without any problems. The reason is, there are various threats when the event takes place. Starting from cases of theft, violence, and other criminal acts. Security must be tightened so that drivers and spectators are equally comfortable.

With security guarantees from the TNI and Polri, it is certain that the pre-season race at the Mandalika Circuit will run smoothly and orderly. There will be no person who wanders into the circuit or performs other ‘crazy’ acts. The audience was also happy because they could see their idol racers up close, such as Toprak and Marc Marquez.

Security around the Mandalika Circuit has been tightened ahead of the race in March 2022. Combined personnel of the TNI and Polri have prepared so that the event will run smoothly. Not only safety at the circuit, the safety of the drivers is also considered with daily swab tests, to ensure they are not exposed to the corona virus.