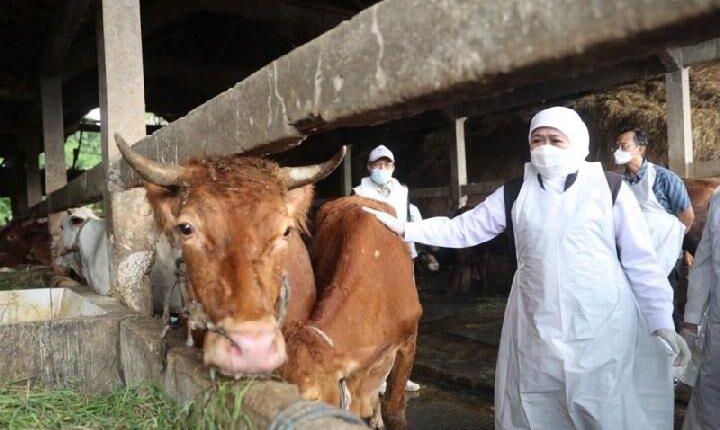 The government continues to optimize the control of livestock ahead of the Eid al-Adha celebration. This supervision aims to prevent the transmission of Mouth and Nail Disease (FMD) which is currently found in many areas.

The Outbreak of Mouth and Fingernail Disease (PMK) which recently infected cattle in several regions in Indonesia prompted the Government to immediately intervene to provide treatment and control. So far, it is known that there are already around 13 provinces in the country that have been infected with FMD, so it is estimated that there are thousands of diseased cows.

Without waiting too long, the Government itself immediately dispatched several teams to carry out the handling. Especially because it is now getting closer to Eid al-Adha which will be celebrated by Muslims, so the handling of PMK is becoming increasingly urgent.

The distribution of direct vaccinations has been accelerated at various points, and the Government has also provided direct assistance to the cattle farmers so that the epidemic that infects their livestock does not cause their income to decrease or even lead to losses.

In addition, the acceleration of vaccination for all cattle will automatically help accelerate the recovery of the economy after the pandemic because the possibility of buying and selling livestock will continue to run well.

Of course, since the outbreak of the PMK outbreak, the price of beef commodities has immediately decreased, including all other processed beef derivatives, such as dairy products, shredded meat and other frozen foods. For this reason, it is not only to accelerate vaccination and provide assistance to cattle breeders, but the Government also continues to strive to resolve the root cause of the problem, namely by finding the main cause of FMD so that it can be addressed immediately and does not recur.

Regarding the implementation of the Eid al-Adha celebration itself, the Government has also formed a PMK Control Task Force whose task is to continue to monitor and provide socialization to the entire community. As stated by drh Dian Wahyu Harjanti that there are several ways that can be done by the community in order to minimize the spread of this FMD from getting wider.

The first way is to dispose of PMK contaminants to a safe place. Do not let these contaminants be dumped into waterways, sewers or even rivers carelessly because it will be very risky to pollute the environment and can also infect other animals.

Not only socialization carried out by the Coordinator of the PMK Control Task Force, but on the other hand the Government has also issued a Circular containing Standard Operating Procedures (SOP) that must be carried out when slaughtering sacrificial animals. As stated in the Circular, at least it is very important for the committee of the sacrificial animal to know where the purchased sacrificial animal came from and it must be ensured that it is not from an epidemic area.

Furthermore, the safest recommendation is that the slaughter will be much better when it is done at the Slaughterhouse (RPH) because there will be directly supervised by a veterinarian. Then for the implementation of self-slaughtering, of course, animals that are not from the outbreak area will be prioritized and for animals originating from the outbreak area, they must be placed in isolation cages even though they appear to be in good health.

All efforts to control and handle FMD in cattle have been carried out as optimally as possible by the Government. The public is also asked to be wise and careful in choosing sacrificial animals to ensure that the animal’s meat is safe for consumption.

)* The author is a contributor to Lingkar Pertiwi Institute