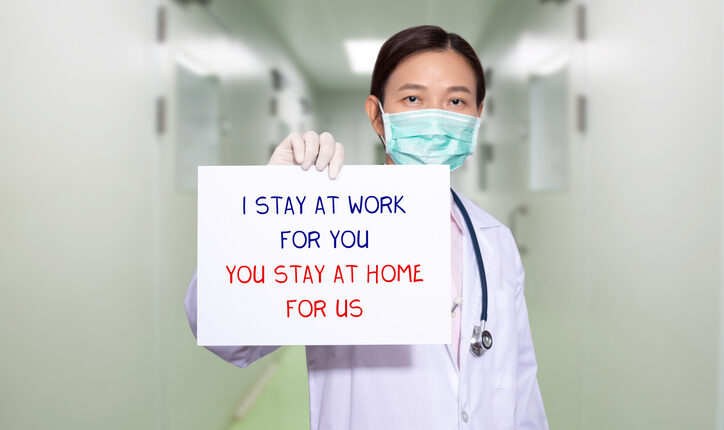 Health workers are one of the main strongholds in controlling Covid-19. The government is also paying attention to the fate of health workers who have worked hard to help cure Covid-19 patients.
Wearing hazmat and personal protective equipment such as faceshield, N95 mask, gloves complete with boots is certainly not something light. The lack of circulation in the PPE will certainly make anyone who wears it sweat like an athlete who finishes a 1 km run.
Adib Khumaidi, Head of the Indonesian Doctors Association (IDI) Executive Committee Mitigation Team (PB) admitted that he was intensifying protection and enthusiasm for health workers. According to him, many doctors were exhausted and died in handling Covid-19 patients.
Adib considered that fatigue resulted in the emergence of new problems. Namely mental resilience which affects the performance of these health workers.
Adib, who is an orthopedic specialist, said burnout can result in a loss of enthusiasm for work. These health workers also did not rule out the possibility of withdrawing from handling covid-19 patients.
He admitted that currently his party is also focusing on compiling a standard book on doctor protection and information systems. These 2 efforts are considered capable of meeting the needs of health workers in the regions.
During the pandemic, as many as 114 doctors died due to exposure to Covid-19. The number has increased by three people per day, from the previous 111 people.
East Java Province is recorded to have contributed the most data, namely 29 doctors died. Then North Sumatra with a total of 21 doctors’ deaths.
On a different occasion, Alexander Kaliaga Ginting as the Head of the North Sumatra Task Force Team, has made working visits to several hospitals in North Sumatra, related to the high mortality rate of doctors and health workers at RSUP H Adam Malik Medan. The hospital is a vertical health facility for the Ministry of Health.
Alexander said, whether we realize it or not, doctors and health workers pay more attention to the health of patients, so that sometimes they forget their own health. For this reason, the government recommends that doctors and health workers who have direct contact with positive patients can be swab as much as 2 weeks.
According to data, the first positive case died in March at Adam Malik Hospital was a health worker. For this reason, the presence and attention of the government to doctors and health workers must be increased. Apart from carrying out regular swabs, the government must also provide additional food, nutrition and supplements as well as temporary shelter for them.
He appealed to prepare hotels or isolation rooms for health workers, because they are exposed directly. It also aims to protect their families at home from being exposed.
Meanwhile, the Ministry of Finance said that the government had allocated a large amount of funds for handling Covid-19 for the health sector, amounting to IDR 75 trillion channeled via the ministry of health (Kemenkes) and IDR 3.5 trillion channeled through BNPB.
This health stimulus is planned for health worker benefits (health workers), compensation for health workers who died from Covid-19, BPJS Contribution Assistance for 30 million Independent Participants (PBPU / BP) and other health expenditures.
Special Staff for fiscal and macroeconomic policy, the Minister of Finance of the Republic of Indonesia, Masyita Crystalin, said that his party had allocated IDR 1.9 trillion for health workers and IDR 60 billion had been allocated to DIPA of the Ministry of Health.
He also explained, in order to maintain good governance, the distribution process must go through a data verification process that is not easy for handling Covid-19, most of which are centered in the Ministry of Health, for example, for incentives for health workers, the Ministry of Health receives reports from all central and regional hospitals.
Meanwhile, Dean of the Faculty of Medicine, University of Indonesia, Ari Fahrial Syam, expressed a similar sentiment. The government, according to him, must keep doctors in Indonesia as a valuable asset and investment.
He considered that to prevent the recurrence of cases of death of doctors and health workers, the key is to control cases.
We have to agree that the front line is not medical personnel, because medical personnel are the last resort to provide intensive care for patients with positive Covid-19, the role of health workers is of course very vital and fatigue is a necessity. For the sake of other bodies, the health workers seem to be mortgaging their health, for the sake of healing patients.
Zakaria, the author is a citizen living in Bogor.