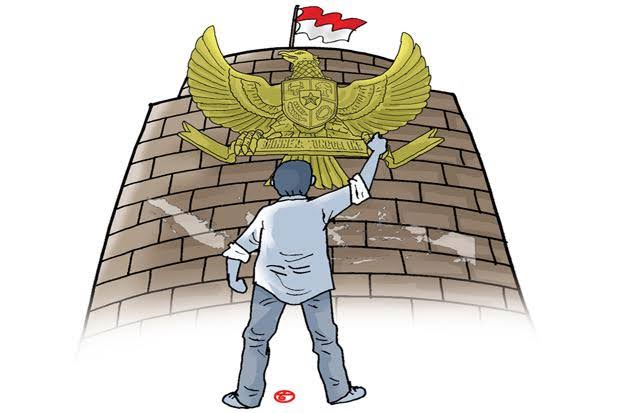 Indonesia is still prone to the spread of the radicalism virus, especially amid the efforts of the government and the world to suppress the pace of Covid-19. Radicals take advantage of the momentum of people’s fear and anxiety to show their existence. The increasing use of the internet is a boon for the spreaders of radicalism and a fast way to spread narratives of violence and increase their ‘family’ members. Narratives of violence are disseminated through social media covered with health and religious information. There is no other word but to be alert. Because all are susceptible to being attacked by the radicalism virus without realizing it.

Public anxiety in facing the Covid-19 pandemic is the right momentum for radical elements to multiply and show their existence. The strategy they are using is different now. If in the past they attacked secretly, they are now starting to appear on the surface. Attacking at close range, like what happened to former Coordinating Minister for Political, Legal and Security Affairs Wiranto some time ago. Their target has now changed. Today they are interested in attacking the government in general.

The narratives of violence they spread were varied. Starting from simple ones, such as chain messages that “oblige” the recipient to forward it, to those clad in tips and tricks that smell health or religion, or even politics. Violence and chaos are their main ingredients, which are mixed with interesting information to make them easy to accept. In fact, many people are exposed without realizing it. They enjoy it by surfing in cyberspace. Reading information that seems useful but implies things that lead to radicals.

Hate speech is linked to the issues of life. Like religion, at the beginning of the outbreak of the Covid-19 issue , which required Large-Scale Social Restrictions (PSBB). The existence of the Prohibition that vaccines are a conspiracy, heralded as the corruption of the government. Thus, the manipulation of data on the number of patients and victims who died did not escape. Hate speech and acts of violence also accelerated. The goal is none other than violence that leads to radicalism.

Therefore, the community together with social media users and citizens as a whole need to support the government through law enforcement and the dissolution of radical mass organizations for the sake of the integrity of the Republic of Indonesia.

So be aware of everything and do self-protection properly. Adhering to health protocols must still be implemented. However, do not forget to fortify yourself from all forms of news or information that lead to radicals, both implied and express. Therefore, let’s welcome 2021 with a movement against radicalism and reject the caliphate and strengthen the spirit of grounding the Pancasila philosophy in everyday life.

Support the Designation of the Free Papua Organization as a Terrorist