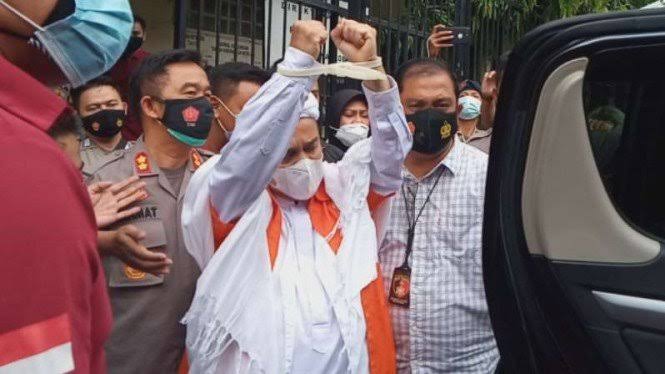 Rizieq Shihab must be willing to get status as a suspect in cases of crowds at a number of events in Petamburan, South Jakarta. One of them is related to her daughter’s marriage contract. The community also participated in overseeing Rizieq’s legal case and supported law enforcers to ensure optimal handling of the case.

Rizieq Shihab is judged to have violated 160 KUHP regarding Sedition and Article 216 of the Criminal Code concerning obstructing the provisions of the law by threatening 6 years imprisonment.

The determination of the suspect to Rizieq Shihab was the result of investigators’ analysis after completing the case title on Tuesday, December 8, 2020.

For the former FPI leader , the determination of his status as a suspect is not the first time he has ever been appointed.

Previously, we already knew that the leader of the Islamic Defenders Front (FPI) Habib Rizieq Shihab received a sharp spotlight because his activities did not comply with the health pro- tokol. The activities he carries out always invite a large crowd.

Marius Widjajarta as a health observer, always questions the absence of a warning given by the Provincial Government of DKI Jakarta. So that the FPI High Priest just saw his son violating the health protocol.

He asked that there should be no selective logging against health offenders. Do not just give sanctions only to ordinary people, but no action against the elites.

Chairman of the Covid-1 Task Force (Satgas) 9 Doni Monardo in his written statement said that the DKI Task Force Team apparently did not discriminate against those who violated health protocols, especially those who did not wear masks at night held in Petamburan.

By giving sanctions to 17 people, and also giving physical sanctions to 19 people. For 17 people, they are subject to fines, so the funds received by the municipal police for DKI are 1.5 million.

Meanwhile, the legal team for the Polda Met ro Jaya as defendant I in the pretrial lawsuit filed by Habib Rizieq Shihab emphasized that the investigation and determination of the suspect against the leader of the FPI mass organization was legitimate. Investigators carry out the law enforcement process according to applicable regulations.

Head of Legal Department of Polda Metro Jaya Kombes Pol Hengky said that his party was in accordance with the rules which were implemented in a professional, transparent and accountable manner.

At the hearing of the respondent’s response to the material of Habib Rizieq’s claim as a petitioner, it was revealed that the Polda Metro Jaya as Defendant I had examined Rizieq as a witness and then as a suspect. The police have also asked for statements from witnesses as well as experts and case titles.

The decision letter as a suspect has also been sent by Polda Metro Jaya to the DKI Jakarta High Court, the reporter and also the petitioner. The Polda Metro legal team also stated that on December 12, 2020, Respondent 1 had arrested the applicant, completing an arrest warrant and an arrest warrant.

The case that ensnared Rizieq Shihab certainly deserves to be guarded, especially since the suspect is said to have deliberately invited the masses including clerics to attend the Prophet Muhammad SAW’s birthday and his daughter’s wedding.

This was disclosed by Police Commissioner Budi Cahyono, while sitting as a witness in the continued trial of the case at the East Jakarta District Court (PN).

In his testimony, Budi said that he heard the invitation from the former FPI leader to the congregation to attend his daughter’s wedding, as well as the birthday of the Prophet Muhammad SAW at his residence.

At first, Budi said, at the commemoration of the Prophet’s birthday, he was carrying out security around the location 200 meters away.

S fter Rizieq Shihab speak, he heard from the sound events located in some aspect related to the invitation.

Not only that, Budi said that Rizieq had also asked the crowd regarding their readiness to attend the event he invited.

As a result, the masses who attended simultaneously stated that they were ready to attend Rizieq Shihab’s invitation.

From this invitation, of course, it is clear that what Rizieq Shihab did deserves to be rewarded with a punishment in the form of detention. Therefore, it is important to thoroughly guard the Rizieq Law case, so that it is not dragged into any misleading issues.