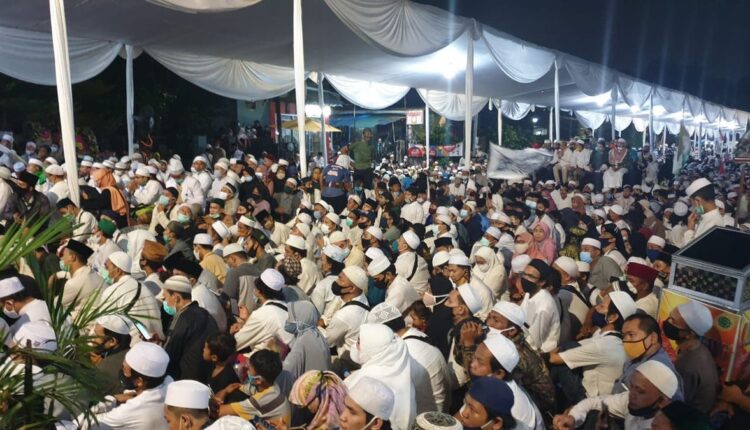 By: Ratna Mayangsari) *
Habib Rizieq’s return to Indonesia continues to spark controversy. Apart from not paying attention to quarantine regulations, Habib Rizieq’s activities have always generated large crowds during the Covid-19 pandemic. This activity is a form of real violation of the PSBB rules, so it needs to get strict sanctions.
Habib Rizieq Shihab has been proven to have violated Governor Regulation (Pergub) Number 79 of 2020 concerning the application of Discipline and Law Enforcement of the Health Protocol as an effort to prevent and control the Corona Virus.
The sanctions have been given to 17 people in the form of fines of IDR 1.5 million and physical sanctions to 19 people who violate health protocols during activities in Petamburan.
Chairperson of the Covid-19 Task Force (Satgas) Doni Monardo in his written statement said that the DKI Task Force Team apparently did not discriminate against those who violated health protocols, especially those who did not wear masks at night held in Petamburan.
By giving sanctions to 17 people, and also giving physical sanctions to 19 people. For 17 people, they will be subject to fines, so that the funds received by the municipal police for DKI are 1.5 million.
Doni explained that the Governor of DKI Jakarta Anies Baswedan had sent a team led by the Head of the PP Police, to deliver an administrative fine of Rp 50 million to the committee organizing the event. This fine is the highest fine and if it is repeated at a later date, the fine will be doubled to Rp. 100 million.
Previously, we already knew that the leader of the Islamic Defenders Front (FPI), Habib Rizieq Shihab, received intense scrutiny because his activities did not comply with health protocols. The activities he carries out always invite a large crowd.
Marius Widjajarta as a health observer, always questions the absence of a warning given by the Provincial Government of DKI Jakarta. So the FPI High Priest arbitrarily violates the health protocol.
He asked that there should be no selective logging against health offenders. Do not just give sanctions only to ordinary people, but no action against the elites.
Meanwhile, member of the Indonesian Ombudsman, Ninik Rahayu, asked the security apparatus and the Covid-19 task force to strictly take action against violations of health protocols related to Rizieq Shihab who violated health protocols during the Covid-19 pandemic.
According to Ninik, Rizieq is someone who is easily imitated by residents. If there is no firm action against it, then Indonesia will experience major problems related to the implementation of the Covid-19 health protocol.
Epidemiology expert from the Faculty of Public Health, University of Indonesia (FKM UI), Pandu Riono, said that monetary sanctions will not deter health protocol violators. He considered that the violators of the protocol should be given education in order to understand the health protocol.
DKI Jakarta Governor Anies Baswedan emphasized that his party was not just a courtesy in imposing a fine of Rp. 50 million on the FPI official. The fine was given because Habib Rizieq had violated health protocols by gathering a crowd at the Prophet Muhammad SAW birthday event.
This statement also responds to the accusations of a number of parties stating that sanctions against Rizieq were just a formality. According to him, the imposition of these sanctions is proof that the DKI Jakarta Provincial Government is showing its seriousness in dealing with the Covid-19 pandemic.
Anies also explicitly stated that his party would not hesitate to impose a progressive fine if Rizieq returned to gather large numbers of people. His party admitted that the provincial government could impose a fine of Rp. 100 – Rp. 150 million if Rizieq Shihab returned to gather the masses.
Anies also ensured that law enforcement and community discipline in the midst of the Covid-19 pandemic must continue. He emphasized that the DKI Jakarta Provincial Government will act and enforce the regulations in accordance with the applicable regulations.
On a different occasion, the Coordinating Minister for Political, Legal and Security Affairs (Menko Polhukam) Mahfud MD promised that there would be firm action against officials who allow violations of the Covid-19 preventive health protocol, including crowds in the midst of a pandemic.
The former Chief Justice of the Constitutional Court also asked religious and community leaders to provide good examples and role models for residents in the midst of the Covid-19 pandemic situation.
Therefore, the fines imposed on FPI leaders are certainly natural, considering that these regulations remain in effect as long as the status of the Covid-19 pandemic has not been revoked.