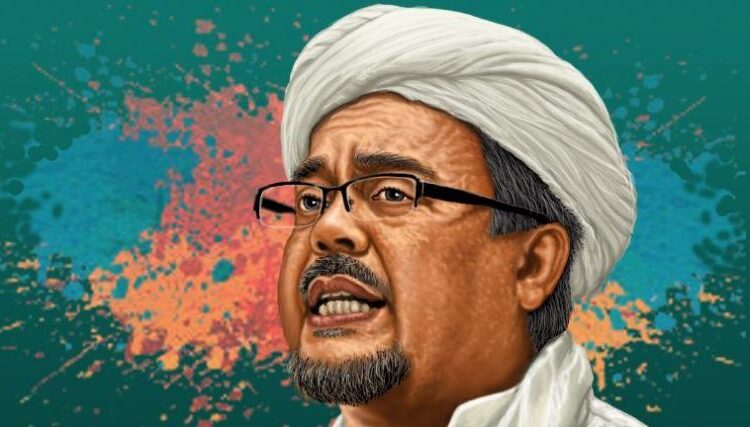 By: Putu Prawira) *
Habib Rizieq continued to hold a lecture safari when he arrived in Indonesia. Apparently he missed his congregation. But unfortunately the event did not meet health protocols and many people crowded around. The public also rejected Habib Rizieq’s lecture, which was proven to continue to provoke residents and hinder the handling of Covid-19.
The crowd was seen around Petamburan, last November 14th. They want to go to Habib Rizieq’s residence, which will hold an in-law event while celebrating the Prophet’s birthday. People wanted to hear his lecture after 3 years he went to Arabia. But unfortunately the event was attended by 10,000 people, all of whom violated health protocols.
This was not the time Habib Rizieq gave a lecture and attracted a crowd. At a commemoration event at Pondok Ranggon, Cipayung, East Jakarta, last November 12, many people came and forgot not to keep their distance. Even worse, some are not wearing masks. The next day there was a similar event in Bogor and again thousands of people attended, just because they wanted to see Habib Rizieq’s face and listen to his lecture up close.
It is very sad when we see the people crowding and scrambling for seats, because they want to listen to Habib Rizieq’s lecture. Even though this activity could form a new corona cluster. However, people ignore physcal distancing rules. It was proven that the Head of Petamburan Urban Village tested positive for Covid-19 after he attended Habib Rizieq’s reception and lecture.
If there is evidence like this, are they still evasive? Habib Rizieq and his mass organizations continued to victimize and argued that the event was private and only invited 30 people. Meanwhile they could not refuse the tens of thousands of members of the mass organizations present. Whereas a few days earlier, FPI lawyer Aziz Yanuar declared the invitation was 10,000 people.
The lie made the public angry because they lightly blamed the guests present. Although they have paid a fine for violating health protocol, amounting to 50 million rupiah, they have no word of forgiveness. Even though Habib Rizieq could have had the OTG status, because he had traveled abroad.
When interviewed, FPI lawyer Aziz Yanuar also blamed other events that were deemed to violate health protocols. Even though the comparison is not apple to apple, because at the event attended by Habib Rizieq, the speaker refused to carry out self-quarantine. So the risk of transmitting the corona is much greater to all members of the mass organizations who attend the event.
The guest who came at the lecture, apart from violating health protocols, also forgot that Habib Rizieq refused to take another swab test, because he did not trust health workers in Indonesia. Even though he could have contracted the corona on the way. When, for example, he is positive for Covid-19 and spreads it to 10,000 guests, do you want to pay for the medicine and treatment room?
Doctor Wiku Adisasmita, spokesperson for the Covid-19 task force, warned against being selfish. Because when there is a crowd, it will bring disaster during a pandemic. Especially if there are people there who are not wearing masks. In the sense that it could have been an OTG status and would transmit the corona through droplets.
Dr. Wiku’s statement should have been heeded carefully by Habib Rizieq. Because if only 1 person gets corona, it will spread to his family and many other people who come into contact with him. Moreover, in a lecture it will be difficult to do tracing. It could be that there is a guest book but the address is incomplete, making it difficult for the task force team to work.
Preaching during a pandemic must strictly adhere to health protocols and be conducted on a small scale. The goal is that there is no formation of a new corona cluster. Do not be angry if there is a crowd at the lecture that the authorities drive away, because they are only doing their job. Habb Rizieq should have carried out an evaluation.
) * The author is active in the Cikini Press and Student Circle

Papuan Students Support the Sovereignty of the Republic of Indonesia