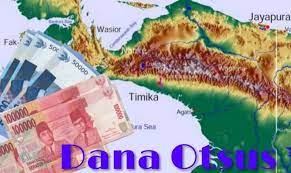 Head of the Region Supports the Sustainability of Otsus Papua

Otsus Papua has proven to be able to improve quality in several areas such as the people’s economy, education, health, and infrastructure. Regional heads and Papuan traditional leaders are united in supporting the sustainability of Otsus, so they are expected to accelerate progress in Papua.
In 2002 to 2020 the government has issued a budget of Rp 126.38 trillion. The funds are a combination of special autonomy and infrastructure funds, the funds are transferred to the provinces and then to the districts and cities. The funds are also very useful for the development of Papua and West Papua.
The Regent of the Arfak Mountains, West Papua, Yosias Saroy, stated that his regional development still desperately needs special autonomy (otsus) budget support. Regent Yosia considered that special autonomy was a solution to accelerate equitable development in all fields, so it needed to be continued.
He made this statement in a 42-second video uploaded by the Papua full of peace youtube channel. He also said that the geographical conditions of the area really needed the support of central government funds in development. This is because the region’s financial condition is limited to develop this area, so it requires special autonomy funds as a solution.
On a different occasion, the Tabi and Saireri Regional Heads Forum agreed that Papua’s special autonomy (otsus) would continue. This was stated in a joint agreement after the evaluation workshop for Papua’s Special Autonomy in the Tabi and Saireri customary areas which took place at the Sunni Garden Lake Sentani Hotel, Jayapura in August 2020.
In the agreement, there are 11 pounds signed by 8 regents and 1 mayor in the Saireri and Tabi customary territories. They are the Regent of Jayapura, the Mayor of Jayapura, the Regent of Keerom, the Regent of Supiori, the Regent of Biak Numfor, the Regent of Sarmi, the Regent of the Yapen Islands and the Regent of Waropen. The eleven points of mutual agreement are recommendations for improvement and rearrangement of Otsus Volume II, namely; Structuring and regulating government affairs that are under the authority of the Regency/City within the framework of Papua’s special autonomy.
There must be an institution or ministry that regulates Special Autonomy at the Center, there must be a Special Otsus Budget Priority List (DPA), there must be a Development Coordination Meeting (RAKORBANG) which is specifically for regional development planning.
Furthermore, there must be a Grand Design Special Autonomy for 5 (five) main programs (education, health, economy, infrastructure). The amount of the special autonomy fund sourced from the 2% DAU ceiling and the Additional Infrastructure Fund must be increased from the current regulation in the provisions of Article 34 of Law Number 21 of 2001 concerning Special Autonomy for the Papua Province.
Re-arrangement of the distribution mechanism of Additional Funds for infrastructure between Provinces and Regencies/Cities. Then, the election of regional heads must have special arrangements. Support for the sustainability of Otsus also came from Community Leader of Keerom Regency, Lukas Welikar, he said that thanks to Otsus Papua, the development in Warbo Village, Keerom Regency has been seen and felt by the local community. He said this when met at the Warbo village hall, Keerom Regency.
He said, thanks to the Special Autonomy, the people of Warbo Village, Kerom Regency really feel the development and progress in their village. Lukas really appreciates the Government in terms of Special Autonomy for the Papuan people because the impact felt is very large for the welfare of the Papuan people. In addition, there has been a lot of government assistance through Otsus that has been obtained by the Warbo village community, ranging from the construction of housing, roads, agriculture, livestock, plantations, as well as education and health, all of which are thanks to special autonomy itself.
Lukas as a community leader in Keerom Regency also supports Papua’s special autonomy to continue because the evidence exists and has been felt and enjoyed by the people of Warbo village. Meanwhile, the Minister of Home Affairs (MENDAGRI) Tito Karnavian emphasized that the aspirations of the Papuan people must be considered because Otsus is based on the spirit of building the welfare of the indigenous Papuan people as a priority.
So, Tito also emphasized that the Special Committee should work within the corridors of the Unitary State of the Republic of Indonesia. Senior advisor on Papua issues, Michael Manufandu, emphasized that the effectiveness of the distribution of Otsus funds should be increased so that efforts to achieve prosperity for the Papuan people can be realized perfectly. He also considered that the benefits of the Special Autonomy funds could be felt for the community.
The Special Autonomy Policy (Otsus) seems to have provided tremendous benefits for the Papuan people. Especially with a good goal, namely to support the acceleration of development and prosperity in Papua.

Rise and Unite Against Covid-19