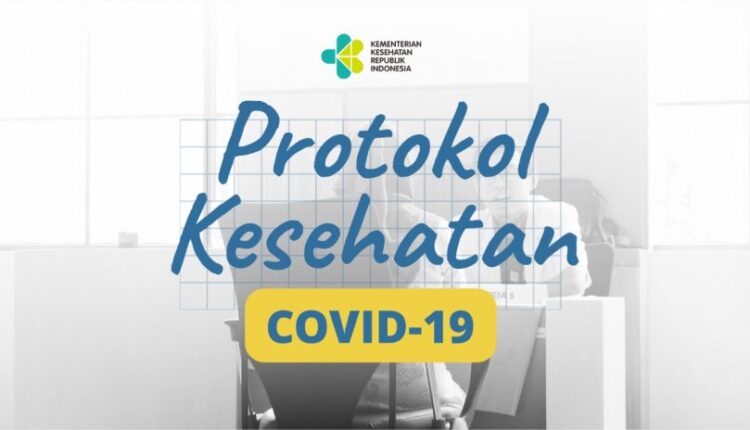 Health Protocol Discipline is the Key Success in Handling Covid-19

Corona is still rampant. The government is trying hard to prevent this disease from spreading, one of which is by promoting health protocols. But unfortunately many are still lazy to wear masks. We need to improve public discipline in adhering to health protocols, in order to successfully deal with co-19.

Health workers in Indonesia have tried hard to deal with Corona patients. They were even willing to work while wearing hot PPE clothes, and did not go home for a while. For fear of infecting his family at home. The government also eliminates the cost of Corona treatment through BPJS, so that all patients are helped.

But unfortunately their efforts have not been appreciated by the community. There are still many who do not wear masks and ignore other health protocols. Though we know this can prevent the transmission of Corona. Until finally the government made a law regarding sanctions and fines for protocol violators, the nominal value starts from Rp 150,000.

Why are there sanctions and fines? So that all people obey the health protocol. It turns out they are more afraid of being punished in order to remain disciplined in wearing a mask. Yet as adults, they should have awareness in implementing it. But unfortunately many underestimate Corona and ignore health protocols.

Fadjroel Rachman, the President’s spokesperson, stated that there were various obstacles to the implementation of the health protocol. Like the habits of the people and culture. Community habits such as gathering people in an arisan event. They are accustomed to gathering and eventually ignoring the rules of physical distancing. This makes us sad.

Is that important to make an event just for the satisfaction of the group, but increase the risk of Corona transmission? Especially if everyone does not wear a mask. Even though now the Covid-19 virus can be transmitted through the air. So it’s best to endure yourself during a pandemic. Do not hold events even though it has become a habit, rather than all hit by Corona.

If everyone ignores the health protocol, how long will the pandemic end? We want to return to living normally, but we don’t want discipline in obeying the rules. Everyone should remind each other if someone doesn’t wear a mask or forgets not to wash their hands. It must be familiarized but eventually it becomes the latest lifestyle.

Actually adhering to the health protocol is also not that difficult. Fabric masks are also cheap and can be bought everywhere, even on the roadside there are also vendors. Almost all public places also provide a place for washing hands. So all that’s left is to change the mindset of the people so they are willing to obey health protocols without having to be reminded.

If you start to feel lazy to wear a mask, remember the condition of people without symptoms. They have no symptoms such as fever and shortness of breath. Next thing I know when tested for swabs, the results are positive. It may be that they forget not to wear a mask, or make contact with patients through a handshake. Do not let you become the next patient and must be treated 2 weeks in the hospital.

The health protocol serves to prevent the transmission of Corona, because prevention is better than cure, right? It’s better to wear a mask and wash your hands thoroughly, than when you are already sick and have to pay hundreds of millions of rupiah in the hospital. The reason is because you do not have a BPJS card or private insurance. The stairs had fallen.
Appreciate the sacrifice of health workers. If we continue to ignore traveling without masks and accidentally transmit Corona, then their work will be much tougher. Even though there were volunteers, the Hospital was flooded by Corona patients. Even the number of co-19 patients in Indonesia has reached 100,000 people.

People need to be reminded to adhere to health protocols such as wearing masks and diligently washing hands. They should be conscious to be disciplined. So they want to implement the protocol because they love their own health, not just being afraid of being sanctioned during a masking raid.

) * The writer is a student at the University of Pakuan Bogor

The Urgency Implementation of Pancasila Values