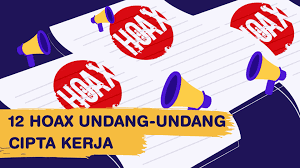 The Job Creation Law was born with many rejections from labor and civil society. Unfortunately they were only consumed by hoaxes and did not really read the 900-page bill. The existence of people who are still consumed by fake news is very unfortunate because it can hinder the application of the Job Creation Law to the recovery of the national economy.

Hoax is fake news that is deliberately created, with the aim of bringing down certain parties. Unfortunately, some Indonesian people still lack literacy so that they are easily consumed by hoaxes. They are also lazy to check the truth of a story and eat it raw, and immediately share it with their respective communities.

This phenomenon causes hoaxes about the Job Creation Law to be produced by rogue elements, who disagree with the Job Creation Law. When this law was enacted, thousands of people demonstrated simply because they were consumed by the fake news. Too bad those who eat higher education but are still affected by hoaxes, for whatever reason.

Even though this hoax can hamper economic growth in Indonesia. Because if many people are consumed by fake news and come to the Constitutional Court to conduct a judicial review of the Job Creation Law, they might be threatened with being canceled. Or, the implementation of this law in the field will be made difficult by some people because they have been hit by hoaxes.

The first hoax about the Job Creation Law is that companies are allowed to lay off their workers at any time. Even though the layoff process is still long and someone who is fired must have a special reason. For example, has committed a criminal act or other serious violations. So every company should not go their own way, because it is supervised by Disnaker.

If the workers believe this hoax, they will be confused and lazy to work. because strikes can no longer be carried out, they will deliberately reduce work productivity. As a result, the quality of the finished product decreases and the buyers also decline. This negative domino effect will reduce people’s purchasing power and be dangerous because it can stop the economy.

If the wheels of the economy do not move, it will be very dangerous, for fear that Indonesia will experience an economic crisis volume 2. The state’s financial condition will be sluggish and life will be difficult. This will hinder the government’s program to restore the national economy. Because instead of raising state finances, workers are not aware that they have reduced economic power.

Anggara, the coordinator of GESIT, called on the public to fully support the Job Creation Law. Also invite them to continue to be optimistic about the future. In that sense, our economic situation will gradually improve if the Job Creation Law is applied in people’s lives. Because there is an improvement in the work system and government bureaucracy.

The Government Ensures that the Covid-19 Vaccine is Halal

Society Refuses to Safari Habib Rizieq in the Region