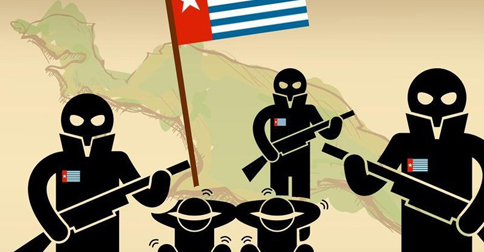 December 1 is often celebrated as the anniversary of the Free Papua Organization (OPM). The separatist group has always persuaded indigenous Papuans to join in the celebration and establish their own state. The indigenous people refused to join the OPM, because they loved NKRI more.

The problem of separatism in Papua has been going on for decades. This was because they did not want to recognize the results of pepera (the determination of people’s opinion) and refused to join Indonesia. So that he founded the independent Papua organization (OPM). These separatists want to be independent and create the Federal Republic of West Papua and consider Indonesia a colonizer.

Even though the indigenous people in Bumi Cendrawasih reject OPM because they have a high sense of nationalism. The chief of the Dani tribe, Jembatan Murid, stated that he and his people still adhere to the sovereignty of the Republic of Indonesia. Even the student considers the government to be God’s representative on earth, so it must be obeyed.

Muid added that so far the Indonesian government has paid special attention to the Papuan people. It takes the form of physical development to attention to the people on Earth of Cendrawasih. Currently, many Papuan children are government officials, both in their own territory and outside Papua (in the sense of the central government).

In addition, Murid also thanked members of the TNI who had guarded the Papua region well from KKB and OPM attacks. they are willing to sacrifice their mind and body, so that there is peace on Earth of Paradise. Students also appealed to other Papuans not to join the OPM, because it means betraying loyalty to the Republic of Indonesia.

This statement by the Dani chief hit the OPM badly. Because while they were getting more and more incessant to persuade the Papuan people to want to defect, the tribal chief was actually on the side of Indonesia. This proves that the indigenous peoples in Bumi Cendrawasih do not want to join OPM, because they have a high love for their homeland.

So far, the OPM has indeed been aggressively taking various measures so that indigenous Papuans support them. Starting from frightening people with firearms, distributing Morning Star flags, to having the heart to commit violence in the field. Even to the point of claiming casualties. Everything is carried out so that they have new cadres and sympathizers.

OPM also conducts provocations in cyberspace so that the Papuan people believe in their incitement. Later, if many are affected, they will turn to be pro OPM and support all their activities. But unfortunately this effort failed because there were many civilians who were smart and able to distinguish which ones were hoaxes and which ones were real news.

It seems that the OPM forgets that when people in Papua easily access the internet, there will be a lot of news about the KKB atrocities. Armed separatist groups affiliated with the OPM have killed many Papuan civilians. So they don’t want to be invited to rebel, because this group is proven to have committed atrocities to their tribesmen.

People in Papua are also proud to be part of Indonesia, because so far there has been a lot of attention from the central government, especially in the era of President Jokowi. Papua has changed from a remote area to a very modern one, with the Trans Papua Road, Hamadi-Holtekam Bridge, and Sentani International Airport. Children also receive scholarships so that they can study up to college.

OPM’s provocation to separate Papua from Indonesia has failed miserably. Because the native people in Bumi Cendrawasih love NKRI and refuse to join them. Indigenous peoples also prefer to join Indonesia, because the government has paid a lot of special attention to Papua. So that their lives will be more advanced and prosperous.