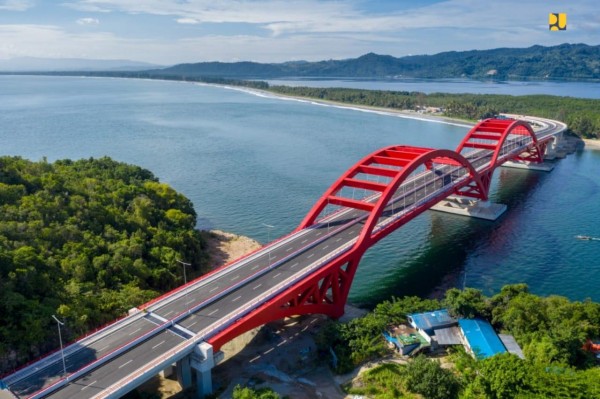 The construction of a number of projects in Bumi Cenderawasih has indeed been proven to encourage the economy of the people of Eastern Indonesia, not least in the Yapen Islands Regency, Papua. The geographical factor of the Yapen Islands Regency which consists of a group of islands is very dependent on infrastructure for the smooth mobility of the population to goods and services.

The government has consistently presented new infrastructure for the Papuan people, such as the construction of the Sumboy River bridge. The 80 meter long bridge connects two districts, namely Kosiwo District and West Yapen District.

The construction of the bridge is of course very helpful for residents’ activities and boosting the economy of the local community. The reason is, prior to the construction of the Sumboy River bridge, residents of the two districts were forced to cross the river and fight the strong currents to get to the city area. Now, through the Sumboy River bridge, people’s mobility to goods and services will be easier.

Regional connectivity with the center of government, economy, education and health is also increasingly affordable because the distance is getting shorter. The economic impact is also starting to be felt because the community can save on vehicle operating costs through the Sumboy River bridge.

Based on data from the BPS (Central Bureau of Statistics) of Yapen Islands Regency, the economy of the coastal area is supported by the agriculture, forestry, fisheries, and trade sectors which contribute more than 15% to the Gross Regional Domestic Product (GRDP) every year.

The Regent of Yapen Islands Regency, Tonny Tesar, said that the source of funding for the bridge construction came from a regional loan facility by PT SMI. The regional loan facility is very beneficial not only for local governments, but also for the community because they can immediately feel the benefits of the infrastructure built.

In an official statement on the Yapen Islands Regency website, Tesar said that his party was grateful that this bridge could be completed with a contract amount of Rp. 20.9 billion. That this regional loan must be accounted for up to even Rp. 1 This loan cannot be used for activities other than those that have been planned.

The need for qualified infrastructure has been felt even more after the Covid-19 pandemic hit Papua.

The Yapen Islands Regency BPS noted that growth in the economic sector in the region experienced a contraction of minus 4.55% throughout 2020 due to the Covid-19 pandemic. In fact, the Regency with a population of 112,000 people was able to grow above 4 percent in the 2016-2019 period.

Therefore, infrastructure development is expected to be able to revive the economy of the islands in the Cenderawasih Bay area. This can be realized by increasing the mobility of people, goods and services through the presence of various infrastructures built by the government.

We need to know that Papua has become the province with the highest economic record in the third quarter of 2021, which is 14.54% on an annual basis. Its growth increased from the previous quarter which amounted to 13.7%.

Then, there are 13 other sectors that also encourage the Papuan economy. In detail, company services grew by 2.02 percent, infocomm 2.71 percent, wholesale trade 9.3 percent, and electricity and gas procurement by 9.29 percent.

Meanwhile, BPS also shows mining and quarrying to be the source of the highest growth, which is 12.95 percent. Increasing the economy in Papua is of course a good thing, because then the welfare of the Papuan people will increase and of course Papua will become a province that is increasingly developed and developing.

Condemn KST’s Acts of Terror Ahead of Christmas