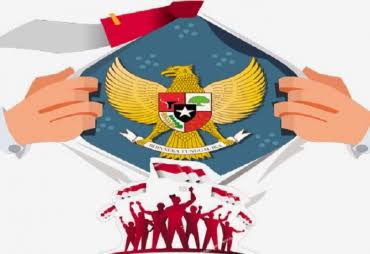 By: Rizal Arifin *
Bhinneka Tunggal Ika is absolute dogma in the diversity of the Indonesian nation. Whereas among the characteristics of each national entity, Indonesia is a complete unit that will not be separated forever. Thus, it is necessary to internalize the values ​​of Pancasila in order to strengthen national unity.
Pancasila contains values ​​in guaranteeing the right to freedom of religion and worship in Indonesia. Pancasila is said to be the nation’s unifying tool in religious freedom. Primarily, the value of the One and Only Godhead then animates article 28 E paragraph 1 and article 29 as the legal basis for the rights and obligations of Indonesian citizens in religious freedom.
The Pancasila ideology is known as an open ideology which means an ideology that is able to follow the current development of the times, is dynamic, an open system of thought, and the results of community consensus. Therefore Pancasila is used as the basis of the state in all aspects of the life of the nation and state.
Pancasila emerged when the public’s lack of awareness to unite, this awareness emerged from the willingness to sacrifice for the sake of the great interests of forming a great nation. In essence, the function of Pancasila does not change and cannot be changed, in the sense that it must remain as designed by the founders of the nation as a guide for the nation, the basis of the state, and as the ideology of the State.
As a first step to anticipating and suppressing the flow of radicalization in the era of globalization, the Indonesian nation needs to be optimistic so that it can survive into the future, the community must be guided and always given socialization to intellectualize the basic values ​​of Pancasila which are the pillars of the life of the nation and state. The role of the Pancasila ideology in suppressing and inhibiting radicalism in Indonesia is important in realizing a developed nation capable of carrying out the state order based on the basic values ​​of Pancasila.
The rise of violence, separatist movements and radical actions that carry the spirit of religion and ideology is very worrying. Indonesia as a large country has various big challenges, namely the existence of a narrow primordial spirit, therefore acts of violence often appear and use the name of religion, of course, quite contrary to the values ​​of Pancasila.
An old issue that often arises is the desire of several groups to re-enforce Islamic law and the Islamic caliphate as state law, even though the controversy over an Islamic state as a political ideology and as a state basis has been rejected and resisted by all elements of the nation.
The formulation of the Pancasila ideology which was initiated by the founding father has determined that Pancasila is the state ideology that has been accepted by all groups and all interest groups because Pancasila has the ability to unite a plural society which has great potential in conflict and division.
For developed countries, ideology is not a problem that needs to be considered, in contrast to developing countries like Indonesia, the implementation of the Pancasila ideology is often a national problem. The rise of the development of radicalism in Indonesia, including religious radicalism, must be able to be controlled. Furthermore, the spread of radicalism has entered the youth community so that the spread of radicalism can grow rapidly. The rapid growth and spread of radical understanding among Muslims is due to the lack of understanding of religion and the values ​​of Pancasila so that it is easy to commit acts of violence and even kill the lives of others, perpetrators only adhere to doif hadiths and books of struggle that are only understood in a clear manner. literal, literal and scriptual, giving rise to misguided thinking.
The implementation of the five values ​​within Pancasila is a spirit of togetherness to protect unity from the crimes of radicals and terrorism. The values ​​of divinity, humanity, unity, populism and justice are overall ideas, people who live these five values ​​will maintain an attitude of solidarity between humans and unity will be placed above differences. Thus, the emphasis on understanding the values ​​of the Pancasila ideology must continue to be heralded because the plurality of the Indonesian Nation can be a trigger for divisions and radical movements that threaten national security.

Derivative Regulations on the Ciptaker Law Encourage the Growth of MSMEs