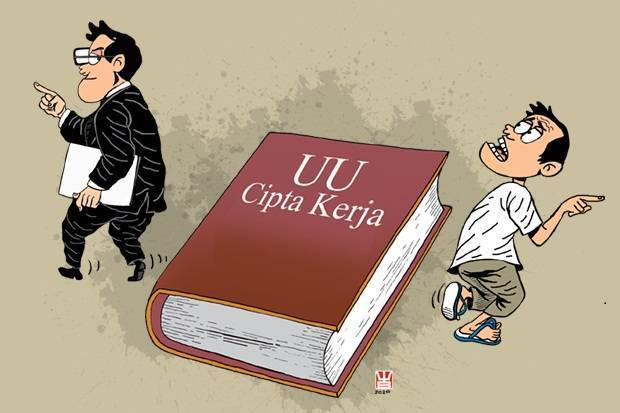 The Job Creation Perppu that has been issued by the Indonesian Government under the leadership of President Jokowi is able to overcome all types of threats, ranging from inflation risks to the threat of stagflation that haunts Indonesia.

Government Regulation in Lieu of Law (Perppu) Number 2 of 2022 concerning Job Creation on December 30 2022 was officially issued by the President of the Republic of Indonesia (RI), Joko Widodo. This issuance is not without reason, because currently the main economic conditions are urgent, where the Indonesian economy will face the threat of a global recession and also high uncertainty.

This is of course because global economic conditions are still not completely stable due to the prolonged impact of the geopolitical conflict involving Russia and Ukraine. Regarding this matter, the Coordinating Minister (Menko) for the Economy, Airlangga Hartarto explained that currently the Government of Indonesia really needs to immediately accelerate efforts to anticipate various kinds of threats including global conditions regarding the economy so that the negative impact on Indonesia is not felt.

Furthermore, according to him, the quick response decision that has been taken by President Jokowi at this time is very appropriate because if not, the threat to the global economy will become even more real. Precisely with the issuance of this Perppu on Job Creation, the country will be able to face various kinds of economic problems, ranging from the threat of a global recession, rising inflation to the threat of stagflation.

Furthermore, there is another urgency why the issuance of the Job Creation Perppu is really needed by Indonesia at this time. This urgency is because the government must restore the deficit of the State Revenue and Expenditure Budget (APBN) below 3 percent, which is also the target of investment realization of IDR 1,400 trillion in 2023.

For this reason, the issuance of the Job Creation Perppu is also able to fill the void in legal certainty, which greatly supports all economic activities in the country, especially for investors who wish to invest in this nation.

Meanwhile, General Chair of the Indonesian Chamber of Commerce and Industry (KADIN), Arsjad Rasjid emphasized that all parties really appreciate whatever decisions have been made by President Joko Widodo and also the Government of Indonesia, including regarding the issuance of Perppu Number 2 of 2022 as a substitute for The previous Job Creation Law which caused a lot of polemic in society.

It is undeniable that the current condition and economic situation in the world is very uncertain. So very responsively, the government really needs to immediately issue regulations that are able to fully support the entry of investment or investors coming to the country. This is because when investors visit many activities in the business world, then automatically there will be more and more job opportunities for Indonesian people and it will also have an impact on continuing to maintain national economic growth so that it is in line with the targets set.

The issuance of Government Regulation in Lieu of Law (Perppu) Number 2 of 2022 concerning Job Creation is also very much needed in order to continue to make Indonesia’s attractiveness increasingly attractive to investors who want to invest their capital. Not only that, but with the existence of the Job Creation Perppu, it is also all the efforts made by the government in alleviating poverty in the country.

The conditions that are currently occurring, namely when the economy is very overwhelmed by uncertainty as it is today, Indonesia really really needs incoming capital to be able to absorb a lot of labor, which will later be in line with providing welfare to the wider community and can also continue to encourage growth. economy.

With the existence of the Job Creation Perppu, it is hoped that business actors and investors are currently still in a state of restraint from making their new investments or there are parties who continue to refrain from expanding their business as a result of many uncertainties, starting from economic uncertainty global to legal uncertainty to do business and invest in Indonesia, all of which can be resolved properly.

For information, in fact Indonesia itself has a lot of extraordinary potential in human resources (HR) and natural resources (SDA) so that it can still be said to have attractiveness for investors. But so far they are still constrained because they are very careful due to the many uncertainties that have been mentioned.

The threat of inflation and also the threat of stagflation continues to haunt Indonesia because of the many uncertainties that have occurred in global economic conditions as a result of the long conflict between Russia and Ukraine. However, with the presence of the Job Creation Perppu which was issued by President Jokowi on December 30, 2022, it was able to overcome all of these problems.