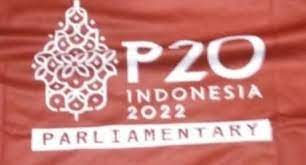 Jakarta – For 3 days, the Indonesian Parliament hosted the 8th G20 Parliamentary Speakers’ Summit (P20). The event, which took place on 5-7 October 2022, was officially opened by the President of the Republic of Indonesia Joko Widodo (Jokowi) on Thursday (6/10).

Previously, President Jokowi had mentioned that Indonesia’s condition was quite good, with the highest recorded economic growth among the countries and regions of the G20 forum members. This indicates that the recovery in the country is continuing.

The P20 event is indeed a meeting whose delegates consist of parliamentarians from all G20 countries, including from the world’s largest economies.

The Chairperson of the Indonesian House of Representatives, Puan Maharani, has explained that the forum, which was attended by the parliaments of the G20 countries and a number of other countries, was held at the Nusantara Plenary Room II.

“God willing, the P20 will start tomorrow at 14.00 and will be officially opened on October 6, which will come by the President at 13.00,” said DPR RI Speaker Puan Maharani to reporters at the parliament complex, Senayan, Jakarta.

Meanwhile, the Indonesian House of Representatives hopes that the P20 will be implemented so that it and the delegates can participate in discussing global issues. The issues that will be discussed, said Puan, include food security and renewable energy.

“I hope that in the future it will allow the world’s parliaments to participate in matters that are currently a very global issue. Of course, the first is food security, then renewable energy and so on,” said Puan.

Puan, as the chair of this global event, revealed that this P20 had the opportunity to invite the international community how to participate and work together in building a nation in this world.

To note, the P20 aims to improve coordination between parliaments to be able to realize the goals of the G20 countries, namely in order to achieve global economic stability and sustainable growth through the budgeting, law-making, and oversight functions of the parliament.

P20 is one of the Engagement Groups in the G20 event, where Indonesia holds the Presidency in 2022. Various preparations have been done carefully. This proves that the DPR RI has also participated in the success of the G20 series of events in order to raise Indonesia’s image in the eyes of the world while at the same time reviving the economy and tourism in the country.

Regarding the inclusion of Indonesia as part of the G20 membership, partly because Indonesia is a large democracy and is believed to have the experience to overcome the economic crisis in Asia at the end of the 1990s and Indonesia has also proven successful in surviving and proven to have good resilience when facing economic crises. globally in 2008.

The participation of the DPR RI in the parliamentary summit program is expected to help and participate in the implementation of all government programs which will later carry out the G20 in November.