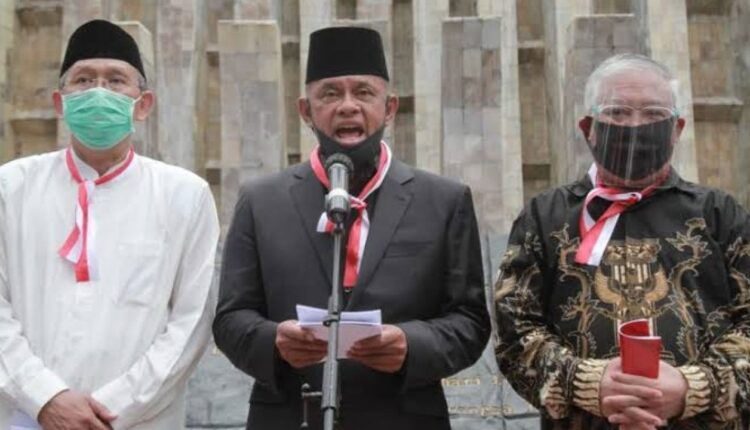 KAMI ARE A Group of Country Provocators

The action coalition to save Indonesia is increasingly troubling the public with its various maneuvers. Various government policies ranging from simultaneous regional elections to omnibus law have always been criticized. The people continue to be influenced to hate the government. Currently, there are 8 US members who have been arrested for spreading hoaxes.
In the midst of a hot atmosphere because people were affected by the pandemic, KAMI were fishing in the murky water. Those who promised to save Indonesia, even hurt the peace of the country. By making controversial statements, saying hate speech, and spreading hoaxes. The goal is for people to disobey the government.
When the omnibus law of the Job Creation Law was inaugurated, KAMI also commented on it so that it would be viral. They expressed support for labor demonstrations, even though it was clear that during the pandemic this was prohibited. However KAMI continue to influence workers to come forward and protest. This is indeed intentional so that there is a struggle between the people and the government.
WE also spread our influence through social media, from Facebook to Instagram. They understand that social media has advantages over print media, namely spreading information quickly and with a wider scope. But unfortunately what is being spread is fake news, aka hoaxes. Especially regarding the omnibus law of the Job Creation Law.
There are many hoaxes about the omnibus law being spread. First, they posted fake news about the article in this law that abolished the minimum wage. KAMI also made a narrative that workers’ leave was eliminated, even special leave for female employees was not included in the law, such as maternity leave, childbirth and menstrual leave.
WE also spread an omnibus law hoax which states that the government prefers foreign workers to native Indonesian workers. Also prioritizing investors from abroad rather than local. There are many more fake news spread on social media and cause people’s trust in the government to start to diminish.
Even though the fake news was proven wrong. Because there is no article that mentions it. If the UMK is deleted, the term will only be changed to UMP. The right to leave remains. TKA may enter but must have special skills. The selection is also very strict. Foreign investors may enter, but local investors are also supported by the government.
The cyber police began to nab several US leaders who were proven to have spread hoaxes. There were 8 members of this organization who were finally arrested because they were proven to have violated the ITE Law. The members of US who were blocked have not been named as suspects. The police will still release an official statement regarding these arrests.
Brigadier General Awi Setiono, Head of the Police Public Information Bureau, stated that of the 8 US members who were arrested, 4 were from Jakarta while 4 others were from Medan. KAMI Medan members with the initials J, D, W, and K. K are the chairman of the KAMI Medan branch. Meanwhile from Jakarta with the initials A, S, J, and K.
When a US member is arrested it does not mean the government is authoritarian, but they are proven to have violated the law. Hoaxes that are spread can damage people’s minds and disturb peace in Indonesia. The authorities arrested them regardless of their positions. Even though the WE member with the initials S belongs to the Executive Committee of the organization, he is found guilty.
The public was also shocked that a US member with the initials K was arrested. The reason is that he is quite famous and has been a candidate in the last election. Also often lectures everywhere. However, even though he is a religious leader, he cannot be above the law. Because his actions in spreading hoaxes were proven to have violated the ITE Law.
The small part of the community who supported US finally realized that the organization was wrong and could only spread hoaxes. They deliberately provoked the people to destabilize the peace in this country. Many people have less sympathy for US because they can only screw up.

Compliance and Solidarity are Keys to Success in Fighting Covid-19

Supporting Covid-19 Handling for an Advanced and Healthy Indonesia