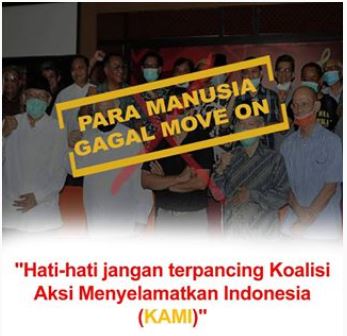 The coalition to save Indonesia does not live up to its name. Because they have no intention of saving this country. However, it plunged many people by spreading incitement to social media. So that many want to demonstrate to reject the omnibus law. Even though the material used to be provoked is only fake news.

Indonesia is currently still prone to hoaxes due to the swift flow of information. So that some do not know that the news that is being read is valid or even fake. Another cause of the circulation of fake news is the lack of literacy skills. There are people who can read but do not understand any further. Even just reading the title and concluding yourself.

The weakness of the Indonesian people is what KAMI take full advantage of . They deliberately spread hoaxes about the omnibus law. The goal is to make the people believe, then turn against the government. The public got heated with KAMI incitement, then held demonstrations in front of the DPR RI building many times.   Also support workers and students to protest.

Finally KAMI hit the rock when 8 members were caught. When the officials of US Medan were arrested by the authorities, a surprising fact was revealed. He and all his members tried to provoke the people not only to protest, but also to act violently . The goal is that the rampaging masses can be incited to impeach the president. Just like the 1998 reform.

This treason scenario was dire, if it had happened. Because what was damaged was not only the DPR RI building, but also shops and shopping centers. The mall was not only destroyed but its contents looted. Fires everywhere. All of this is similar to the events of 1998 that KAMI will be nosy about. Though this is traumatic for many people.

The conversation about the incitement to be spread is in a WA group. From the chat, there are several kinds of hoaxes that KAMI members will share . Starting from the accusation that the DPR RI building could be attacked by demonstrators because it contained thieves. Even though in the era of President Jokowi (since 2014), corruption has been completely cleared.

US members will also spread hoaxes about investment clusters in the omnibus law. Indeed, the Indonesian government makes it easier for foreign investors to enter Indonesia. However, they spread the issue of SARA because investors from China will enter. Even though it is not only foreign investors, but local investors are also made easy to invest.

KAMI deliberately raise the issue of investors because there are a small number of people who are afraid to hear the word ‘foreign’. It is as if those who come from other countries always have a negative connotation. Investment also cannot be equated with colonialism or slavery. Because foreign investment companies can only own a maximum of 49% of shares.

Another incitement spread by them was the obligation to carry Molotov cocktails. This is the craziest provocation, because KAMI encourage demonstrators to carry dangerous objects. Moreover, how to make Molotov cocktails is relatively easier than other weapons, and the ingredients can be found at chemical stores.

If KAMI scream why the members were arrested, then this is the most annoying drama. How can they play the victim when the mistakes are so great? Already planning treason, carrying dangerous objects, potentially injuring others, still feeling innocent. It is just too much.

The public was amazed, angry, and antipathy towards US. It is better if the abbreviation is changed to a coalition of treason, because they have not taken any real action to save Indonesia. Their subjective hatred keeps crazy plans out and harms many people.

There should be no more people who trust KAMI provocation because they are increasingly taking advantage of their intelligence. Unfortunately not in the right field, but his brain was used to provoke others. as well as incitement and spread hoaxes on social media arbitrarily .

Beware of the Covid Cluster During the Holiday Season