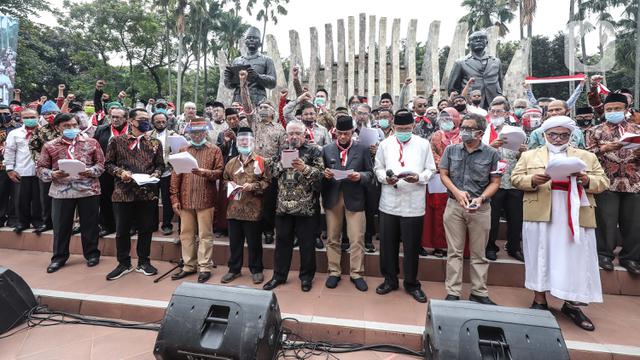 In Surabaya there was a riot because the KAMI declaration was disbanded. They must not be angry with the authorities, because the program clearly violates health protocols. Because it was held in a closed room and was attended by too many people. After all, declarations during the Covid-19 pandemic are very unethical and do not empathize at times of concern.

The KAMI members were emotional because the East Java Regional Police broke the KAMI declaration in Surabaya. They also accused the masses who rejected the event as paid demonstrators. In fact, the reason the declaration was dismissed was that there was no permission from the building owner. So that violates the rules, because every official event must have a permit before it is held.

The KAMI declaration which discussed neo-communism as well as social gatherings also violated health protocols. Because they are determined to invite up to 150 people. In fact, during the pandemic, only 30 people attended to important events such as marriage contracts. If the declaration gathers hundreds of people, the apparatus will direct it.

Apart from the number of participants, what was highlighted from the event was the place. KAMI declarations are made in a closed building. If 150 people are gathered in 1 hall, can we maintain a minimum distance of 1 meter? Especially if the participants are not disciplined and take off their masks or just use a face shield. KAMI cannot guarantee that the program conforms to health protocols.

Moreover, the declaration in a closed room is even more dangerous because the Covid-19 virus is transmitted via stuffy air. For example in an air-conditioned building hall. If in the end there are participants who contract the covid-19 virus, do KAMI want to be responsible and treat it until it recovers? Instead of adding to the participants’ insight, the event will instead create a new corona cluster.

KAMI should not be angry and pay victim if the declaration in the City of Heroes is dissolved. Instead, they have to thank the authorities for being reminded. If the security forces are scolded, then they are the ones who violate the law. Because they were desperate to hold a busy event even though it was still a pandemic period. KAMI are considered not responsive to the situation of Indonesian society.

One of our figures is a retired officer. He should have maintained discipline and obeyed the rules. Especially during the Covid-19 pandemic. An event that is carried out must comply with health protocols. If at 1 event the declaration is angry, what if there is another rejection? This shows the original character that is less wise.

If you really want to make a declaration, it’s best to find a place that gives permission, and choose an open space such as a field. There must also be a place to wash hands, distribute hand sanitizers, and all must wear masks. Participants are also limited, so they can keep their distance. But unfortunately the community lacks sympathy, so they don’t want to give permission to use the place.

When KAMI insist on making a declaration, it is better to do it in virtual. You can use the Zoom application or Google Meet. In fact, save on gasoline and lodging costs. Don’t just have the mindset that an event has to be done in person. If you don’t use technology to minimize the risk of corona, how can you get the sympathy of the people?

The demonstrators were even happy that the KAMI declaration was disbanded, because they also agreed that the event did not comply with health protocols. People who hold demonstrations are representatives of the people who clearly reject the presence of KAMI in Surabaya. Because they always provoke and heat things up, not reconcile pandemic situations.

The KAMI Declaration in Surabaya which was dissolved by the East Java Regional Police is an example that they did not think long. But they are ambitious and fulfill political appetites, so they are desperate to hold events that do not comply with health protocols. The community is increasingly losing sympathy because KAMI play together and don’t obey the rules.