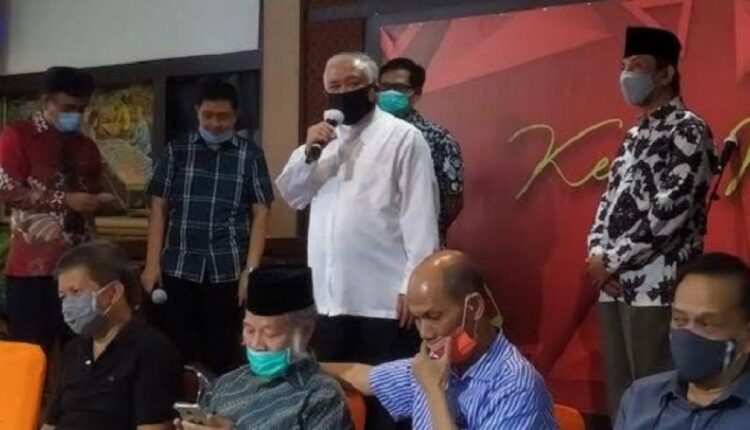 The Coalition for Action to Save Indonesia (KAMI) is still disturbing by criticizing the government’s steps in overcoming the corona effect. Especially in the economic field. If people continue to carry out psychological terror, people can be influenced to refuse to comply with government programs and the effect is that the state’s financial condition will decline.

When KAMI was formed by Rocky Gerung cs, the president did not give a response and considered it a breeze. However, they even spread hatred against the government. They only demanded the government but did not provide a way out to be free from the effects of the pandemic, and considered the 8 demands a form of democratic life.

One of the demands in the KAMI declaration is to order the government to deal with the Covid-19 pandemic. Even though the president and the task force team have tried hard to deal with corona in various ways, including requiring compliance with health protocols. Sadly, at the time of the declaration, many of our members took down their masks.

This is what makes a lot of people laugh because KAMI are like seeing germs across the ocean but not realizing there are elephants in the eyelids. The mistakes themselves are not acknowledged but always blame the government for failing to overcome the Covid-19 pandemic. If they are male, they will volunteer for the corona vaccine because they boast that they want to save Indonesia.

The people have been divided by KAMI and it has had a bad effect. The fear is that the publication of the 8 demands during the declaration will make the public hate all government programs. Including when the president overcame the effects of corona in the health sector. People can refuse if they are asked to do a rapid test because they think it is only a trick from the hospital and the government.

Many people will refuse to wear masks because they lose confidence in the government. All of this because of KAMI provocation so that the people also hate the government which is considered to be a tyrant. Even though the president and the Ministry of Health have set health protocols, for their own safety.

KAMI demands also have a long tail in the government’s steps to overcome the economic downturn due to the corona effect. The pandemic has made our finances decline but things are not as bad as they describe it. In fact, many people buy expensive folding bikes and other imported products.

KAMI force the government to overcome a recession due to the corona storm. Indonesia’s income has decreased but in fact there has not been a recession. The slander of the recession can make people panic buying and buying groceries, for fear of an economic crisis volume 2.

If the groceries are bought up and stockpiled because people are afraid that their stock will be scarce, then the economic law will apply and the price will increase. This makes the government even more confused because people can experience a decrease in purchasing power. Even though they have been given social assistance of 600,000 rupiah, the prices of basic goods cannot be controlled.

KAMI also prohibit the government from defending the interests of big and foreign businessmen. Even though they came not to colonize, but to invest. If there is a company that is built from investment results, it can absorb a lot of labor. So that people who were laid off due to the corona effects can get jobs again and the economy improves.

However, KAMI slander can make people protest against its construction and destroy government plans. Job vacancies were canceled because the investment project stopped, due to the lack of support from the people. The community is invited by KAMI to think narrowly and consider all investors to be bad people, even though they only want to work together.

Don’t let the public be provoked by KAMI demands that are not based on facts. They also hamper the government’s work in overcoming the effects of the corona, both in the health and economic sectors. KAMI are only looking for people’s attention, so don’t believe what he is saying.

Beware of the Spread of Radicalism in Indonesia