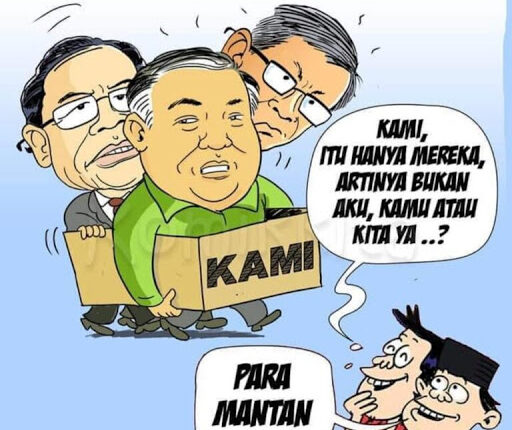 By: Zulkarnain) *
The political situation in Indonesia heated up a little when KAMI made a declaration last August. They openly attacked the government with various nonsense accusations. This organization claims to be a moral movement, but it has clear political intentions and an ambition to become president by 2024.
The presidential election is still 4 years away. However, many people speculate, who will be the next leader of the nation? Many names from various parties emerged. The year 2024 is considered close, even though the reality is still a long time. This situation arose out of curiosity as to who would replace President Joko Widodo.
This is where KAMI emerge and immediately enchant all Indonesian people. As long as the presidential election is still 4 years away. So they have enough time to increase popularity. Even though the KAMI figures are already well-known, such as Din Syamsudin and Rocky Gerung, they are currently less popular with young politicians.
Why do KAMI continue to take action and seem to want to save Indonesia? Because they clearly have the ambition to become president. There is even news that the KAMI envoys who are ready to fight to become the next presidential and vice presidential candidates are the pair Gatot Nurmantyo and Titiek Soeharto. According to them, the people long for a firm president like a retired officer.
For the past 6 years, Indonesia has been led by Jokowi, who comes from civil society and is a timber entrepreneur. KAMI feel that Indonesia is more suitable if it has a more ferocious president, like the New Order era. Even though Jokowi used to be just an ordinary citizen, he had a firm character and was not clumsy. In fact, he was the one who was adept at cutting the bureaucracy.
KAMI accusation is clearly wrong, because it does not depend on one’s work background. Being president is a big mandate from the people. Leaders need assertiveness, but also take their age into account. Someone who is over 60 years old usually suffers from disease and his immune system is not as good as a young person. So don’t propose a retiree to be a presidential candidate.

Former president Megawati already smelled KAMI politics and she stated that many want to become president, why not create a party? Because in reality a candidate for leader must have a political vehicle in the form of a party. This is a rule that is quoted from Indonesian constitutional law.
Megawati’s insinuation made the public understand that KAMI were only looking for faces and taking advantage of the publicity during yesterday’s declaration. In fact, they want to declare the next batch in Bandung and Jogjakarta, so that more media coverage. Even though this event is the same as the previous declaration which was full of scorn.
The West Java branch of the KAMI declaration was clearly rejected by the masses. They don’t want Bandung to be contaminated by the existence of this organization which can only take action without providing solutions. In fact, it is feared that this event will become a new corona cluster, because it is held in an air-conditioned hotel and is attended by many people. Fear that there are many violations of health protocols there.
The community is also increasingly stifled by comments from US members who are negative in tone. If you want to be famous and intend to be a presidential candidate, then don’t just talk. But imitate the way President Jokowi’s motto of work and work. Save Indonesia can be started from the intention to provide jobs to the unemployed, so they can open new companies.
KAMI political motives for the next presidential election are evident. They use the stance of blaming the government and want to win the sympathy of the people. Then use the declaration event as a moment to be highlighted by reporters again. Unfortunately people are allergic to sweet promises and ignore their existence.